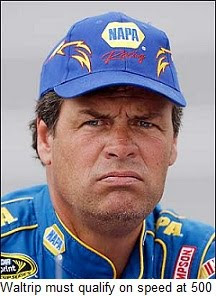 Sirius NASCAR Radio’s Sirius Speedway with Dave Moody has learned that Michael Waltrip will be forced to qualify for the 2011 Daytona 500 on speed, after a potential transfer of owner points from TRG Motorsports did not materialize earlier this week. Waltrip will drive a special, black-and-blue NAPA Auto Parts Toyota as he attempts to qualify for the 53rd running of the “Great American Race;” making his 25th consecutive start in the Sprint Cup Series season-opener.

The #71 TRG Motorsports Chevrolets finished 35th in Sprint Cup owner points a year ago, securing a guaranteed starting spot in the first five races of this season. TRG owner Kevin Buckler told Sirius Speedway that his team is geared up to run the entire 2011 championship schedule, and will announce a driver and sponsor lineup next week. “We took a huge leap by jumping into the Sprint Cup Series in this down economy,” he said. “Our goal for the first year was simply to survive, and we did. We showed improvement last season, and this year, we hope to be even stronger.

“I want to prove that the NASCAR model still works; that a guy like me can get involved at the highest level of the sport and build his program gradually over the course of four or five years. We’re not ready to win races yet. In fact, my goal for 2011 is to occupy the middle of the field. But we’re getting there.”
Posted by Dave Moody at 2:11 PM