Bass Pro Shops To Sponsor Stewart For 18 Races In 2013 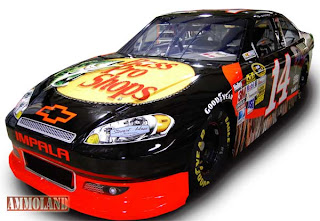 In a press conference today at Talladega Superspeedway, Bass Pro Shops announced that it will join Mobil 1 as primary co-sponsors of Tony Stewart and the No. 14 Stewart-Haas Racing NASCAR Sprint Cup Series team beginning in 2013.


Bass Pro Shops will adorn the hood of Stewart’s Chevrolet for 18 races, including the Daytona 500. Mobil 1 will be on the hood for 11 races. Nine primary races remain available for a brand to partner with Stewart, the three-time and reigning Sprint Cup champion.
“We’re very proud to have a longtime partner in Bass Pro Shops join us at the Sprint Cup level,” said Stewart, a winner of 47 Sprint Cup races who is currently competing in the Chase for the NASCAR Sprint Cup for the eighth time in his career. “I’ve known Johnny Morris (founder of Bass Pro Shops) for years and he’s one of my good friends. We want to help grow his business and share his passion for the outdoors. After years of representing Bass Pro Shops, it’s great to expand the relationship to a primary co-sponsorship in the NASCAR Sprint Cup Series.”
Stewart has been a brand ambassador for Bass Pro Shops since 2001, beginning with a personal services agreement that morphed into sponsorship of Stewart’s dirt late model stock car that he campaigns at various short tracks across the country, including the annual Prelude To The Dream at Eldora Speedway in Rossburg, Ohio, where Stewart is a three-time winner (2006, 2008 and 2009). It continued via a primary sponsorship of Stewart’s World of Outlaws Sprint Car Series team beginning in 2005, and as an associate sponsor of SHR since the team’s inception in 2009.
“We’re thrilled and honored to step up to a primary co-sponsorship of our good friend and fellow outdoorsman Tony Stewart,” said Morris, who founded Bass Pro Shops in 1971. “It’s an excellent opportunity for our company to be even more involved with who we consider to be the greatest all-around racecar driver of all time.”
“I love the outdoors and everything that goes into maintaining the outdoors. Nurturing the land is as satisfying for me as hunting and fishing,” said Stewart, who served as the 2012 honorary chair of National Hunting and Fishing Day on Sept. 29. “Giving back is something that drives me, be it in racing or with the outdoors. In order for racing to be sustainable, we have to have younger generations get involved. It’s the same with the outdoors. In order for hunting and fishing to be sustainable, our land and wildlife needs to be managed and maintained, and that knowledge has to be passed on from one generation to the next. My role with Bass Pro Shops, whether it’s on the racetrack, in one of their Tracker Boats or up in a deer stand, helps accomplish that goal.”
Posted by Dave Moody at 2:28 PM