Earnhardt: Concussion "Scares The Shit Out Of You" 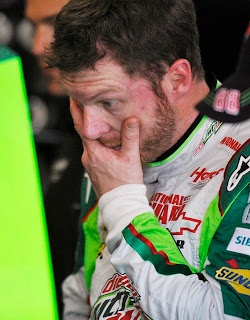 
“It’s been a lot of time off,” said Earnhardt of his two-week, concussion mandated hiatus. “(I’ve had) a lot of time on my hands, just exercising and doing what the doctors told me to do. I’m feeling better every day (and) just going through the process. You just have got to be patient and let things happen.”
NASCAR’s most popular driver said he actually suffered two different types of concussion; one in a testing crash at Kansas speedway last month and a second on the final lap at Talladega.
“The first one at Kansas was your typical concussion (in) the frontal lobe, with the headaches and the fogginess that you typically feel. The one at Talladega was a vestibular (concussion); in the back or the base of the brain, where the brain and your spine connect.” Earnhardt said the vestibular concussion “mixed up a lot of anxiety and emotional stuff. The symptoms were more anxiety driven. If I got into a busy situation, I would get a lot of anxiety. So the two concussions were completely different. I was dealing with different symptoms.
While frustrating, Earnhardt said his two-week layoff has been educational.
“I’ve learned a ton about what I’ve went through,” he said. “I feel like I’m a lot smarter, a lot more prepared and understand the situation a lot better now than I did beforehand. It’s something I’d rather not have went through, (but) I learned a lot from it. It’s been good for me. I’m just excited to be back to work, get back in the car and get back to normal. Get back to the life that I’m used to.”
Earnhardt responded to speculation that he might sit-out the remainder of the 2012 season, saying, “I left my options open. Like the decision to get out of the car in the first place, I wanted the doctors to make that decision instead of me. If I could race, I wanted to be at the race track. It’s what I love to do. If the doctors felt that I was healthy enough to do that, I wanted to be doing it. I’ve really kind of left all that up to them throughout the whole process.” 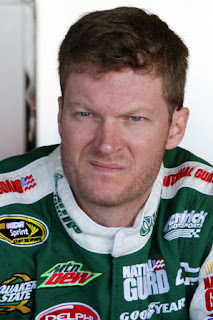 He also responded to comments by other drivers, including former series champion Jeff Gordon, that they would have hidden their symptoms and remained in the car in pursuit of the championship.
“I can understand people’s opinions that they would try to push through it, or ignore it to stay in the car,” said Earnhardt. “I did the same thing in the past. Some concussions are kind of light, and the symptoms are real light. If you don’t have another incident, you feel like you can get through it. Some concussions are really bad, and I don’t care how tough you think you are, if your mind is not working the way it is supposed to, it scares the shit out of you. You are not going to think about race cars. You aren’t going to think about trophies. You are not going to think about your job. You’re going to be thinking, `what do I have to do to get my brain working the way it was before?’ That’s going to jump right to the top of the priority list, I promise you.
“I didn’t have a choice,” he said. “I knew something wasn’t right. You want your brain to clear up and the fogginess to go away. Every concussion is different. They’re kind of like snowflakes. Everyone is different and you react differently to each one. You can’t ignore concussions. It’s really dangerous doing that.
“It’s just been really frustrating at times,” he said. “I felt like I could have raced in Kansas for sure, and probably ran at Charlotte with no problem. I felt kind of foolish sitting at home feeling okay, and not being in the car. It feels really unnatural.”
He said substitute driver Regan Smith eased his fears that the No. 88 would lose the momentum it built through the season.
“Regan did a really good job for the team,” Earnhardt said. “I feel like we didn’t miss a beat and I can get back in the car as if nothing has changed. That couldn’t have went better. It was really hard to see my car out there running around turning laps without me in it. That was difficult. I didn’t want to take any chances, and I wanted to get back in the car as soon as I could.
‘But I wanted to make sure it was not too quick.”
Photos: Jerry Markland/Getty Images for NASCAR, AP Photo/Rainier Ehrhardt
Posted by Dave Moody at 2:11 PM