Wood Brothers Getting Back In The Groove 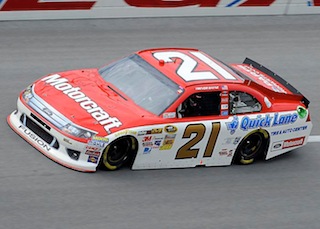 The Wood Brothers’ part-time Sprint Cup schedule is looking more like a full-time effort these days, with racing in each of the first three weeks of October.


Trevor Bayne and the No. 21 Ford Fusion start fourth this afternoon at Talladega Superspeedway, flying the pink and purple colors of the Ford Warriors in Pink. Next weekend at Charlotte Motor Speedway, they will carry the blue, yellow, and red colors of Good Sam and Camping World, and the following week at Kansas Speedway, the Woods’ No.. 21 Ford will sport the traditional red, white, and gold colors of Motorcraft and Quick Lane Tire and Auto Centers.
In addition to October’s three races, Bayne and the Woods plan to test the 2013 Ford Fusion in a pre-race test sessions at Kansas Speedway.
Team co-owner Eddie Wood said he’s pleased that the team has been able to expand its schedule from an expected 12 races at the start of the season, to 16 points-paying events and the NASCAR Sprint All-Star race at Charlotte.
“Getting to run three races in a row puts us back in the mode of running full time, like we did in the past,” he said, adding that testing the new, 2013 Ford Fusion at Kansas will help the team gather information for next season and give Bayne additional laps and seat time on the newly repaved race track. He has never run a NASCAR Sprint Series Cup there before.
“It’ll be a really busy weekend,” Wood said.
Posted by Dave Moody at 5:42 AM