While admitting that his championship hopes appear bleak, Kevin Harvick said he hopes Talladega Superspeedway can provide a competitive and emotional turnaround for him and his Budweiser Chevrolet team.

“Obviously the year has not gone as it has needed to go,” said Harvick. “It’s been one of those years where (we) as an organization haven’t done a very good job of having cars that are fast enough to come to the race track and compete like we want to compete. We’ve definitely not been where we needed to be, but we have got ourselves into the Chase. We’ve got some decent finishes and have something change momentum-wise to get where we need to be.

“We haven’t been able to do that all year,” he said. “Every time you think you have something going right it kind of seems you have something else go wrong. You just keep battling through it. You can blame it on luck, but it’s really not luck’s fault. We haven’t had the cars that are fast enough to run on the race track and compete like we need to. You’ve just got to keep at it.”


After Gil Martin replaced Shane Wilson as crew chief at midseason, Harvick said he expects no further personnel changes during the off season.
“As far as I know, that situation is all settled for next year,” he said. “I hadn’t heard any different. As far as I’m concerned, the team is set and going forward. We have a lot bigger issues to work on than crew chiefs. You can throw crew chiefs at it all day long but we need to work on things in house.” 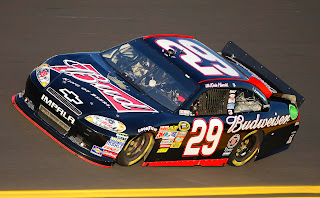 Asked for specifics on what his Richard Childress Racing team needs to address, Harvick joked, “I don’t have enough time.” He admitted, however, that he will not be surprised to see a new Director of Competition at RCR next season.

“I think that definitely would be the key piece to start at. I think Richard (Childress) would have a lot more answers on these things than I would. I know he has been working hard to fix a lot of things. When you don’t have (a Competition Director) in there, it just didn’t pan out the way we all thought it would. It just kind of became a little bit more disruptive than everybody had anticipated.
“Richard and the guys are working hard on putting back structure… to get everything where it needs to be. It’s a big machine. Sometimes it’s hard to find the problem, and when you are looking for people of that magnitude, there are not a lot of them in the garage. The wheel is really big and sometimes when you (go from) the top of that wheel to the bottom, it’s hard to get it back going again. He’s definitely working hard to make all of that happen.”
Harvick said he will practice very little this weekend, and look to stay trouble-free to the end of Sunday’s 500-mile race.
“You don’t want to go out and tear the bumpers off your car (when) everything has been pushed, pulled, filed on, and maxed out for the templates in every single area,” he said. “You have to try to preserve that until the race starts. You definitely don’t spend as much time on your back-up car (as) on your primary car, because there is only so much time and you have to prioritize things. You can help control that by not getting your back-up car out of the trailer. There is really no reason to practice. We have all done this (restrictor plate racing) a fair amount, and you want to make sure you don’t have any problems, vibrations and things like that. That is really all you need to do.
“This is one of those places where you have a lot of things that are out of your control,” he said. “I really enjoy the style of racing, and the thinking and strategy and the things you try to do to put yourself in position to win.
“Sometimes you wind up on the wrong side of things, and you go through spells where you don’t finish races. You just have to have luck on your side to make it all happen.”
Posted by Dave Moody at 2:14 PM