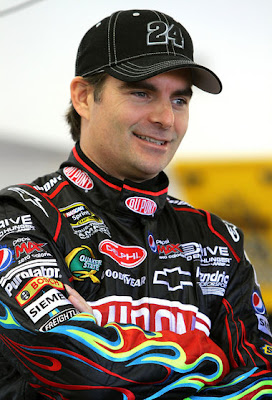 Jeff Gordon says there is just one thing he knows for sure about Kansas Speedway.


It’s fast.
The four-time NASCAR Sprint Cup Series champion was one of many drivers to eclipse the track in practice earlier this week, and said he expects speeds to climb even higher between now and race time.
“It’s fast, there is no doubt about that,” said Gordon, adding that despite three full days of testing, the newly paved oval has yet to develop a workable second groove.
“(There’s) not enough of one to go out there,” said Gordon. “I think it’s going to get wider as the races go through the weekend, with double file restarts and all those things. (But) I still think the preferred lane is going to be around the bottom.


“It’s got a lot of grip and is really fast, especially in today’s conditions,” he said. “It’s cool, the wind is not as bad as it has been, but it’s going to change on Sunday. It’s going to be warmer and the sun will possibly be out.
“Qualifying is going to be ridiculously fast,” he promised. “We are definitely finding the limits of the tire, the grip level and aerodynamics. From inside the car, you’ve got to be extremely committed. It is as fast of a track as I can imagine us being at this year. It kind of reminds me a little bit of Michigan, but maybe even more demanding than that.”
Despite those speeds, however, Gordon said Sunday’s race may not be one of pure track position and strategy.


“I think what you are going to see is tire wear,” he said. “With a pretty hard tire (and a) new surface, you don’t typically see a lot of tire wear, so tire strategy comes into effect. But it doesn’t mean there are not going to be accidents and cautions. It’s going to come down to whether you take two tires (or) four tires, and then whether or not we see a lot of cautions.


“We don’t really know that until Sunday.”
Photo: Jerry Markland/Getty Images for NASCAR
Posted by Dave Moody at 5:25 PM