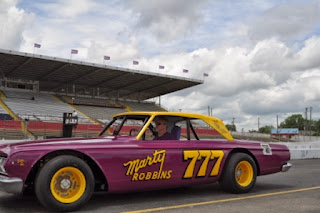 Hundreds of classic, custom, and celebrity cars will roll into the Ingersoll Rand corporate campus in Davidson, N.C. on Saturday, Nov. 30 of Thanksgiving weekend for the inaugural AmeriCarna LIVE Car Show presented by Ingersoll Rand and MSC Industrial Supply Co.

“We’ve had a great response from the NASCAR community in offering celebrity cars to showcase at the event,” said Ray Evernham, the event host.  “AmeriCarna LIVE will serve as a great holiday activity for the whole family and also raise awareness and funding for IGNITE.”
Evernham, a former NASCAR championship crew chief and current ESPN broadcaster, created the car show to support IGNITE, a new community center in Davidson for young adults with high functioning autism (HFA) or Asperger's Syndrome (AS).  IGNITE offers activities, skills training, and educational workshops that will foster social, financial, educational, and employment independence for its members.
AmeriCarna LIVE derives its name from a new Ray Evernham-hosted television show that is in production and set to premiere on the Velocity channel in early 2014.  The “AmeriCarna” TV show will tell behind-the-scenes stories of lost race cars, barn finds, speed secrets, Hollywood films, historical racetracks and other unique places.
Several special vehicles to be featured on the television show will be showcased at AmeriCarna LIVE, including a 1940 Ford Moonshine Car and Marty Robbins’ 1964 Plymouth Late Model Modified.  The Velocity Channel will also be filming at the car show for an episode of AmeriCarna.
Set on the beautiful Ingersoll Rand corporate campus on the edge of Lake Davidson, which sits adjacent to Lake Norman, the car show is open to the public from 10 a.m. to 4 p.m. and will also feature live music from local bands. Other event features include silent auction, local food vendors, and a special activity area for kids. Spectator admission is $5 per person.  Parking is available on the Ingersoll Rand campus, which is located at 800 Beaty Steet, Davidson, N.C. 28036.
Car entries are on a first-come, first-serve basis in advance of the event until capacity is met.  Registration is $25 per car and can be completed on our website, www.americarnatv.com/live.
To register your car and check out more details on the show, visit www.AmeriCarnaTV.com/LIVE.
Posted by Dave Moody at 4:09 PM