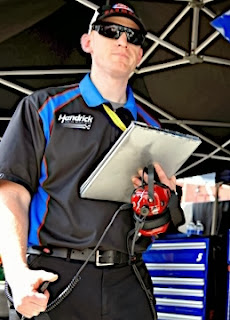 Keith Rodden has been named crew chief for Jamie McMurray and the No. 1 Earnhardt Ganassi Racing with Felix Sabates Chevrolet SS.  Rodden will assume the role effective immediately to prepare for the 2014 NASCAR Sprint Cup Series season.


”We are very happy to get a crew chief that is the caliber of Keith,” said EGR Owner Chip Ganassi.  “He brings a lot of great experience with him to our organization.  We are building the foundation for what we believe will be long-term success in our NASCAR operation and Keith fits into those plans perfectly.  I look forward to having him in the organization and leading the No. 1 team.”
Rodden joins EGR from Hendrick Motorsports where he was most recently in the role of lead engineer for the No. 5 Chevy.  In his two seasons as the lead engineer on the No. 5, the team won four races and made the Chase for the NASCAR Sprint Cup in both seasons.  The Denver, NC native has over 10 years of NASCAR racing experience.  Rodden began his racing career as a race engineer for Andy Petree Racing.  He has also worked for Evernham Motorsports, Richard Petty Motorsports and Red Bull Racing in similar positions.  In 2007, Rodden served as crew chief for Kasey Kahne for multiple races while filling in for Kenny Francis.
“I am excited and appreciative for this opportunity and can’t wait to be just a small piece of an excellent team that Earnhardt Ganassi Racing is building,” said Rodden.  “Chip has quality people and is also building great race cars.  This team has shown that they can win races and compete at the highest level of this sport and I look forward to working with Jamie and everyone on the team as we work to prepare for the 2014 season.”
Rodden is a graduate of North Carolina State University and with his wife Julie and their daughter Emmie, live in Kannapolis, NC.
Jamie McMurray will begin his 12th full-time season in the NSCS in 2014.  The 2010 Daytona 500 and Brickyard 400 champion has seven overall wins, including his most recent win at Talladega Superspeedway just five weeks ago.