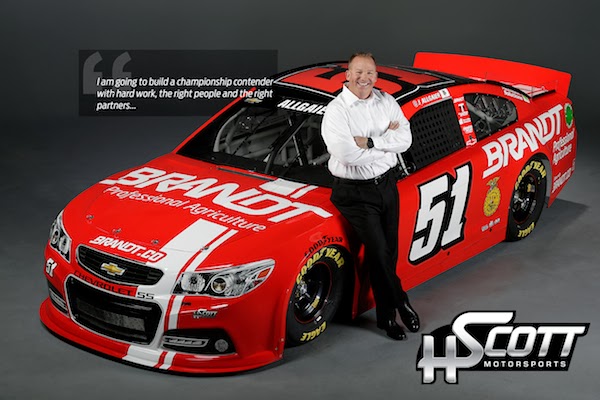 Harry Scott Jr. announced today that Phoenix Racing has been renamed HScott Motorsports. The rebranding of the team comes five months after Scott purchased the team from James Finch. As part of this announcement, the company unveiled its new branding, including a new logo, website and social media accounts.

"I am truly looking forward to the 2014 season," said Scott. "We have two great drivers in place with Justin Allgaier and Bobby Labonte, we've partnered with great sponsors and the team is ready and excited for Daytona. Now that we have launched the HScott Motorsports brand, everything is in place. We can't wait for the season to get started and to get back to racing."

After purchasing the team last year, Scott pledged to establish an operation with a focus on the future and eventually competing for a NASCAR Sprint Cup Series championship. During this past offseason, HScott Motorsports signed Justin Allgaier to drive the No. 51 BRANDT Professional Agriculture Chevrolet SS fulltime and Bobby Labonte to drive the No. 52 Chevrolet SS for a number of races, including the Daytona 500. HScott Motorsports also expanded their relationship with Hendrick Motorsports, which historically has been providing engines to the team.

Allgaier has four starts for HScott Motorsports and will compete for NASCAR Sprint Cup Series Rookie of the Year honors after finishing fifth in the 2013 NASCAR Nationwide Series championship points. Labonte, the 2000 NASCAR Sprint Cup Series (NSCS) champion, has won 21 NSCS races in his career, which started in 1991, and will bring veteran leadership to HScott Motorsports this season.

The team also hired NSCS veteran Steve Addington to serve as competition director and the crew chief for the No. 51 driven by Allgaier. Jimmy Elledge, who served as interim crew chief for Allgaier in 2013, remains with the team and will be crew chief for Labonte's No. 52 team.

James Finch, former owner of Phoenix Racing, remains an advisor to the team and will be listed as the owner of Labonte's No. 52 Chevy. The No. 51 BRANDT Chevrolet SS and No. 52 HScott Motorsports Chevrolet SS will both compete in the season-opening Daytona 500 at Daytona International Speedway on Sunday, February 23.
Posted by Dave Moody at 3:07 PM