Robby Gordon is looking to add another form of racing to his already eclectic resume’. Robby Gordon Motorsports and SPEED Energy have formed a partnership with BIGFOOT 4x4, Inc., owner of the most well–known monster truck in the United States. 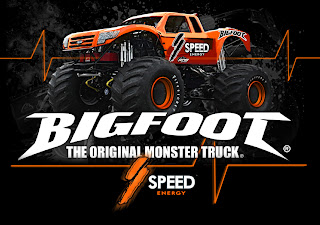 A NASCAR Sprint Cup and Off-Road racer who also has past experience in IndyCars, Gordon has entered into a multi-year agreement with BIGFOOT 4x4, Inc. to field a SPEED Energy-backed BIGFOOT Monster truck out of Gordon’s Charlotte, NC, race shop; the 19th chassis in the BIGFOOT fleet. Gordon’s energy drink company will serve as co-primary sponsor of the truck.


“This partnership with BIGFOOT 4x4, Inc. is a big step for our company,” said Gordon. “It opens the door to market SPEED Energy to a new demographic. Being featured as a sponsor on the truck is just one element to the relationship, we will also be selling SPEED Energy/BIGFOOT #19 diecasts, t-shirts, hats and other merchandise.”
In 2012, the monster truck will be used primarily for display purposes. Beginning in 2013, the truck will participate in events with a possibility of Gordon being behind the wheel. “I’m excited about the opportunity to drive the SPEED Energy/BIGFOOT #19 monster truck,” he said. “We built the truck a few years ago and we’ve played around with it, but actually competing in events would be a lot of fun.”
“We are really looking forward to teaming up with Robby and Speed Energy,” said Bob Trent, Vice President of Sponsorships & Business Development for BIGFOOT 4x4, Inc. “Robby and (BIGFOOT owner) Bob Chandler go back to the early days, when both teams were Ford sponsored. Robby’s dynamic outlook and his racer’s mentality fit right in with the BIGFOOT way of life! Be on the lookout for a whole line of Robby Gordon’s Speed Energy/BIGFOOT #19 merchandise.