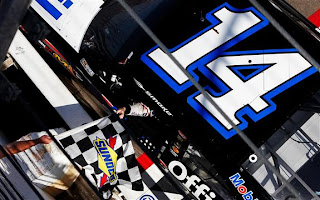 Stewart moved from third to first with a testosterone-rich restart move with 30 laps remaining, then held off Jimmie Johnson to claim his first victory of the 2012 campaign. One year ago, Stewart appeared to be en route to Victory Lane at LVMS, only to have a botched pit stop spoil his chances. This time around, he took matters into his own hands, winning a head-to-head battle between the winners of the last seven Sprint Cup Series championships, keeping Johnson in his rear-view mirror despite heavy pressure in the final four laps.

"Man, I'm just finally glad to win one here," said Stewart. "We were so close last year and had a dominant car. I'm not sure we had the dominant car, but we had an awful fast Mobil 1/Office Depot Chevy. I'm just glad to finally, finally get one at Vegas. We have to win ourselves a Southern 500 (at Darlington Raceway) and we'll have won at all the tracks we're racing at right now."

For Johnson. Sunday marked a second consecutive day of digging out from an opening lap crash and NASCAR penalty for illegally modified c-pillars at the Daytona 500. A wreck in practice Saturday forced his Lowes Chevrolet team to roll out the backup car, but Johnson moved quickly through the field after starting at the rear. He took the lead from Matt Kenseth on lap 99 and remained in contention to the end.

Stewart has now won a race in each of the last 14 seasons (1999-2012), four of the last six races on 1.5-mile tracks and six of the last 13 overall. It also marked the first victory for new crew chief Steve Addington, who replaced Darian Grubb at the end of Stewart’s 2011 championship season.

With the win, Stewart climbs into a tie for sixth place with Carl Edwards in the Sprint Cup championship standings, 25 behind new leader Greg Biffle. Kevin Harvick is second (10 points back), followed by Denny Hamlin, Dale Earnhardt, Jr. and Matt Kenseth.