Bayne To Salute Summitt at Bristol 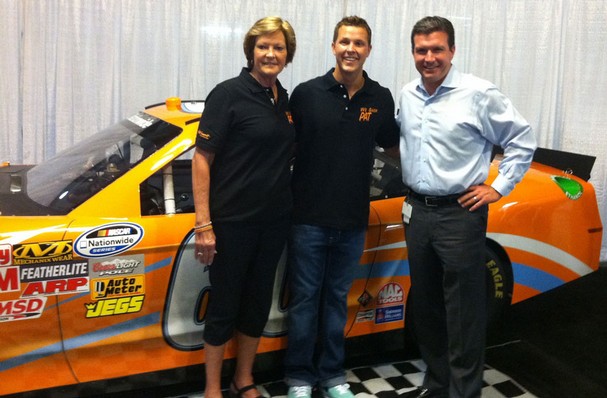 Trevor Bayne will pilot an orange Ford in the Food City 250 at Bristol Motor Speedway on Aug. 24, saluting for a very special Tennessean.


Bayne, a resident of Knoxville, TN and big University of Tennessee fan, will drive a “We Back Pat”-themed Roush Fenway Ford sponsored by YourRaceCar.com in the in the Food City 250, in honor of recently retired UT Women’s Basketball Coach Pat Summitt.
The promotion is designed to raise national awareness of The Pat Summitt Foundation’s mission and contribution to the fight against Alzheimer’s disease. Summitt, the all-time winningest coach in NCAA basketball history who won eight NCAA national championships while coaching the Vols, was diagnosed in August of 2011 with early on-set Alzheimer’s disease. She retired in April of this year and now serves as head coach emeritus for the Lady Vols.
"Growing up in Knoxville, I've always been a big UT fan and an even bigger fan of Pat Summit,” said Bayne, winner of the 2011 Daytona 500. “I have always respected what she stood for and how she conducted business. I am excited she is going to be a part of our team at Bristol. Now we need to carry on her winning tradition."
Summitt is equally excited to have Bayne backing her foundation at Bristol.
“We are honored that Trevor will be representing The Pat Summitt Foundation,” she said. “I have heard that Trevor began his career in Knoxville at the age of five, racing go-carts. With Trevor also calling Knoxville home, it’s great to see the success he has had over the past several years.”
Summitt also will serve as Grand Marshal for the Food City 250.
Photo: Summitt (L), Bayne and Bristol GM Jerry Caldwell
Posted by Dave Moody at 5:11 PM