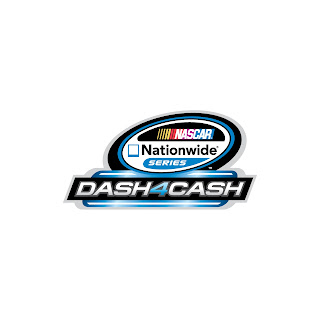 No, there hasn’t been a procedural change. Instead, a change to the popular NASCAR Nationwide Series Dash 4 Cash bonus program will be in place. This year, Daytona will serve as the qualifier to determine which four drivers will vie for the first of four $100,000 bonus payouts beginning July 14 at New Hampshire Motor Speedway.


Following New Hampshire, the next three series races also are Dash 4 Cash events: July 22 at Chicagoland Speedway; July 28 at Indianapolis Motor Speedway – the series’ inaugural race at the famed Brickyard – and Aug. 4 at Iowa Speedway.
“I’ve been waiting for these races,” said Austin Dillon, the 2011 NASCAR Camping World Truck Series champion, who graduated to the NASCAR Nationwide Series this season and earned his first win last weekend at Kentucky Speedway. “It’s going to be a wild one at Daytona, and anybody can put themselves in a position for $100,000 going into New Hampshire. I’m going to try to stay out of trouble early and have a shot at the end to be one of those top four to have a chance at the Dash 4 Cash next week.”
“That says a lot for (NASCAR, Nationwide Insurance) and our sport,” said point leader Elliott Sadler. Last October, he was the highest-finishing eligible driver in the final Dash 4 Cash race at Charlotte Motor Speedway. He won the $100,000 cash bonus, and an identical $100,000 payday for his fan partner, Joe Thornton.
“We’ve always been a ‘fans first’ sport and to bring them in to have the opportunity to win this kind of money is awesome,” Sadler said.
“It was a thrill just to come to the race. But to win $100,000? I (was) speechless,” said Thornton. “Everybody didn’t believe me that I won the trip, and I called them at 2:00 in the morning to watch me on TV because I was gonna win that money.”
Here’s how the Dash 4 Cash program works: The top-four finishers to receive NASCAR Nationwide Series championship driver points at Daytona will qualify for the first D4C race at New Hampshire. The highest finisher of those four drivers at NHMS -- regardless of whether he or she wins the race – will win the $100,000 payout and qualify for the next event at Chicagoland. Additionally, the top-three finishing drivers to receive championship driver points at NHMS also will qualify for the next event. The same rules apply for the remaining three events. If one driver wins the three previous D4C awards and the Iowa race, Nationwide Insurance will award an additional $600,000 bonus, bringing the total payout to $1 million.
Fans can participate in the action by entering the NASCAR Nationwide Series $100,000 Sweepstakes at www.nascar.com/dash4cash. Four lucky entrants will receive an all-expense paid trip to the final D4C event at Iowa Speedway. Each fan will be randomly paired with an eligible D4C driver, and the fan whose driver wins the D4C award also will go home with a check for $100,000.
Posted by Dave Moody at 1:43 PM