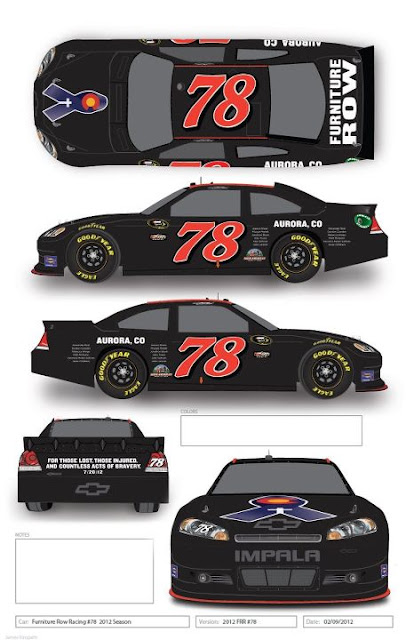 Regan Smith's No. 78 Furniture Row Chevrolet that will pay tribute to the victims of the Aurora, Colo. tragedy during this weekend's NASCAR Sprint Cup Series race at Indianapolis Motor Speedway.


The movie theater where the shooting took place is approximately seven miles from the Furniture Row Racing shop in Denver, Col., and the paint scheme on Smith's car this weekend pays tribute to the victims and their rescuers.


The hood of the car will feature a ribbon encircling a memorial cross, along with the red and gold logo that appears on the Colorado state flag .The rear quarter panels include the inscription, “Aurora, CO” and the names of the 12 people killed in the tragedy .The rear TV panel features the dedication, “For Those Lost, Those Injured And Countless Acts of Bravery -- 7/20/12.”


The tragedy directly impacted the Furniture Row family. Kimber Avra, an employee of the Furniture Row Companies, was at the Aurora movie theater with her friend, Micayla Medek when the attack occurred. Avra suffered only scrapes and bruises, but sadly, Micayla was one of the 12 killed in the shooting.


"Our hearts go out to the victims and to their families," said Furniture Row Racing general manager Joe Garone. "It really hits close to home for us here in Colorado. The movie theater where the shooting took place is only a few miles from where our team is based in Denver. We mourn the loss of life from this senseless tragedy, and feel we also need to stand up and acknowledge the heroism of those people who put their lives on the line to save others. Our thoughts this weekend will be with all the people who suffered from this horrific act of violence."
Posted by Dave Moody at 3:00 PM