Numbers Don't Lie: No Need To Tinker With The Chase 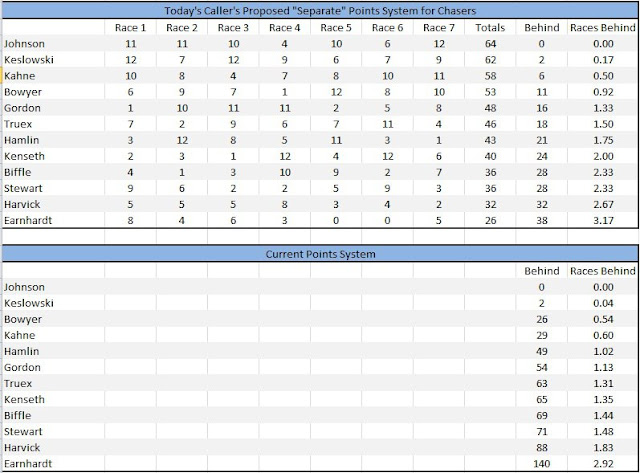 No matter how intense the championship chase may be, there will always be those wanting to improve it.


In recent weeks, a small but vocal group of fans and media members has espoused a revision to NASCAR’s Sprint Cup point system, creating a separate points table for the 12 Chase contenders. Under the so-called “12-1 System,” the top-finishing Chase contender in each race would receive 12 points, regardless of where he finished in the overall rundown. The next-best Chase contender (regardless of overall finish) would receive 11 points, with each subsequent Chase driver receiving one less point.


Proponents claim the “12-1” system would produce tighter, more exciting championship races by penalizing drivers less in the aftermath of a poor finish, keeping more teams in title contention and increasing fan interest. Unfortunately, the numbers show that the exact opposite is true.


Sirius XM Speedway listener Jason Lundstrom did the math this week, performing an “apples-to-apples” comparison  to determine whether the “12-1” system really does produce a closer, more exciting Chase. Lundstrom’s table reveals that under a separate, “12-1” points system for Chase contenders, Jimmie Johnson would hold a two-point lead over Brad Keselowski with three races remaining; identical to the margin he enjoys under the current, 43-1 points system.


Under the “12-1” system, Kasey Kahne would rank third in championship points -- six points behind Johnson – while Clint Bowyer would be 11 points behind in fourth. At first glance, that seems like a tighter points chase. In reality, however, it’s not.


Under the “12-1” system, the fourth-place driver lags behind the leader by 92% of a single race. Under the current system, the gap between the championship leader and fourth place is 60% of a race.


The top six in championship points are closer under the current system, as well. Sixth-place point man Jeff Gordon is currently 1.13 races from the lead, while under the 12-1 system, Martin Truex, Jr., would be sixth in the title chase, 1.5 races behind.


Under the current system, the entire Chase field is separated by 140 points, or 2.92 races. Under the 12-1 system, there would be 38 points (3.17 races) between leader Johnson and 12th place Dale Earnhardt, Jr.


Again, the 12-1 system actually results in a less-competitive title chase.