﻿ Jeff Gordon hasn’t strapped into a Sprint Car in a decade or two, but the former Open Wheel star said he sympathizes with fellow driver Tony Stewart, who suffered a badly broken leg in a Sprint Car crash earlier this week and will be sidelined indefinitely.


“I don’t think it’s quite sunk in yet,” said the four-time Sprint Cup Series champion today at Watkins Glen International.  “I was in Knoxville this week… in that environment of Sprint Car racing and around the people that are feeling the impact of that. Now here I am this weekend (at) this race, where the impact is being felt as well.  Tony is such an influential person in motorsports, as a driver and as a supporter of racing. It’s tough.
“I was looking all over those cars trying to understand what happened,” he said. “You’re there and you’re in awe of these awesome beasts of race cars; 930 horsepower, 1400 pound cars with tons of downforce.  They just fly… and it makes me want to get behind the wheel of one, so I totally understand the appeal. 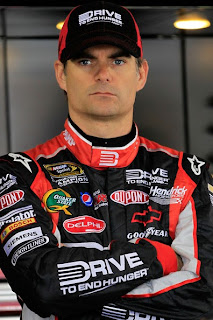 “You look at Tony (with the) talent to go out there and be as competitive as he is. He has a shot at winning those races, which is unbelievable.  He’s racing against guys that do that every single weekend.  They compare to the space cowboys of the NASA program several years ago, where they’re sitting on top of a rocket, without a lot of protection.  I hope that this can actually be a great benefit and influence on the Sprint Car community to make these cars safer.
“There are some areas that could be improved,” said Gordon, who won USAC’s National Midget championship in 1990 and its Silver Crown Series title in 1991. “These cars are lightweight, they’re fast and they’re cool and awesome, but we haven’t seen a lot (of advances) in seat technology. We’re seeing the type of injury happening with the torque tubes and driveshaft being exposed and the lightweight components.  I hope to see something like this (change) that.
“We’re missing Tony and haven’t had a chance to speak to him yet, but can’t wait for him to get back as soon as possible.”
Gordon called criticism of Stewart’s Sprint Car participation unwarranted, saying, “When the conversation is about who is a real racer in this garage area -- who’s got the most talent, who’s out there doing the most for motorsports -- Tony Stewart rises to the top of that list. Then, as soon as he gets injured, (people) say, ‘Oh boy, maybe he shouldn’t have been doing that.’
“I tell him all the time when he runs the Sprint Car races and wins or is competitive, ‘Man, that’s awesome. That’s unbelievable.’
“I couldn’t do that,” he said, “and I don’t choose to do that because of different things that are happening in my life. But I applaud him and definitely support him in that effort.  It’s just unfortunate that this has happened.”
Posted by Dave Moody at 2:35 PM