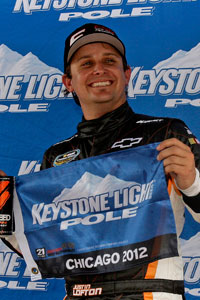 Justin Lofton returns to Sharp-Gallaher Racing’s No. 6 Chevrolet Silverado on Aug. 21 to race in the NASCAR Camping World Series under the lights of Bristol Motor Speedway. The Westmorland, Calif., native is scheduled to compete in eight of the final 10 2013 Camping World Truck Series events.


SGR and Lofton have had success together in the past, winning the 2009 ARCA Racing Series championship, earning two Keystone Light pole awards and the winning in the Camping World Truck Series at Charlotte Motor Speedway en route to an eighth-place finish in the 2012 championship point standings.


Lofton drove the No. 6 SGR MadVapes Chevrolet in the 2013 season-opener at Daytona International Speedway starting on the outside of the front row and finishing fourth. Lofton returned to the MadVapes Silverado in May to post another strong performance at Charlotte Motor Speedway, starting sixth and finishing 10th.


Eddie Sharp recently announced a new partnership with California businessman Bill Gallaher, forming Sharp-Gallaher Racing. With the return of Lofton, the No. 6 team is poised once again to challenge the Camping World Truck Series field for the remainder of 2013 season.

I'm pumped to get back in the No. 6 SGR Chevrolet as that's been my home the past few years," stated Lofton. "Because of the limited schedule, we are not racing for championship points, but we will be racing for wins! I know Eddie and the team are ready to run the No. 6 Chevy on a consistent basis and I'm thrilled to be back in NASCAR competition."
Team Owner Eddie Sharp commented, "Justin is on top of his game and we couldn't be happier to have him back where he belongs. Justin and the Lofton's are like family so when we needed to put someone in the No.6, he was clearly our go-to driver."


Lofton returns to competition starting at the UNOH 200 in Bristol, Tenn. on Aug. 21 and will run the remaining Camping World Truck Series races with the exception of the road course event at Canadian Tire Motorsport Park. The season finale at Homestead-Miami Speedway could be added to the schedule, pending additional sponsorship.
Veteran crew chief Bryan Berry will lead the No. 6 team. Berry has over 200 starts as a crew chief in the NASCAR Nationwide and Camping World Truck Series, working mostly with veteran driver Brendan Gaughan.
Posted by Dave Moody at 2:21 PM