Zipadelli On Busch: "Nothing Is Done" 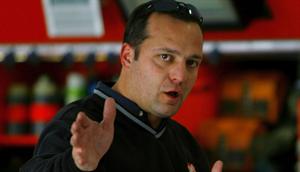 
“Nothing is done,” said Zipadelli when asked about a FOXSport.com report indicating that Buch has an offer on the table to drive a fourth SHR Chevrolet next season. “Obviously, there's options out there. We're looking at everything that's there, (but) there is nothing done.”
Asked if the team is courting drivers other than Busch, Zipadelli said, “no, not at all.” He added that SHR must manage this latest expansion better than it did while growing from two cars to three during the most recent offseason.
“There are lessons to be learned,” said Zipadelli. “If something were to come (with Busch), we would look at where we fell short (this season) and try to do a better job at it. We have made lots of gains throughout the year, but I still think we have room to improve. We're still working on that.”
He has previously blamed the decision to field a third Sprint Cup entry team for rookie Danica Patrick as a major factor – along with the introduction of NASCAR’s new Gen-6 race car – as a major reason for the team’s slow start to the 2013 campaign.
Posted by Dave Moody at 6:00 PM