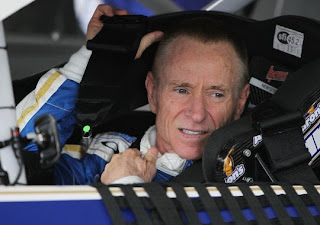 Despite being one of the most experienced and respected drivers in the NASCAR Sprint Cup Series garage, Mark Martin said today that he is feeling the pressure of replacing Tony Stewart in the No. 14 Chevrolet.


“I’m a little bit nervous,” admitted the 31-year Sprint Cup Series veteran. “Today is going to be action packed, with a short amount of practice to qualify and get ready to race tomorrow night; all packed into one day. I’m excited about the challenge and I’m extremely committed to do a good job for this race team, for this group, for Tony and hopefully turn his car back over to him in as good or better standing than when it was turned over to me.”
SHR Competition Director Greg Zipadelli made no attempt to hide his happiness with obtaining Martin for 12 of the final 13 races, saying, “For us it’s a homerun. Obviously, he has big shoes to fill (taking) Tony’s seat and there are not many guys in the garage who could do that. We all agreed that if there was any way to get Mark Martin, he was the guy that would do us the best job. 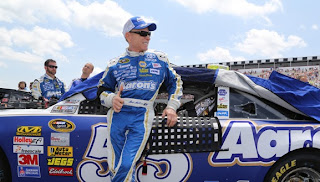 “We said we were going to take our time and try to be as calculated as we could. We felt like it was the best opportunity for the No. 14 car to perform on a weekly basis and do our sponsors the justice that they deserve.”
Martin said he visited Stewart in person earlier this week, joking, “I couldn’t get a word in edge wise. That tells you what two weeks of bed rest does for you.  He went into great detail about the accident, what caused the injury and the fix for that particular freak accident. All the stars had to line up just perfectly for that to happen where it injured him. He went through in great detail how they were going to address preventing that from ever happening again in Sprint Car racing. He talked a lot about Sprint Cars, a lot about safety in Sprint Cars and we talked some about injuries.


“Finally, after about an hour of Tony never taking a breath, I got a chance to talk a little bit. I had some injury stories for him. We had the biggest laugh. I thought he was going to start crying once, (we were) laughing so hard. I told him about when I had my foot and ankles broken... the story about when Darrell Waltrip drove my car at La Crosse, Wisconsin.  We had a really good time (and) we did talk a little bit about the No. 14 car and about Cup racing.  We had a really good time and he was in really good spirits.”
Martin said last week’s announcement that Brian Vickers will drive Michael Waltrip Racing’s No. 55 Aaron’s Toyota full-time next season, “obviously opened the door for this to happen. It’s been a work in progress since Brian’s win up at New Hampshire. Getting Aaron’s re-signed, getting Brian signed, getting all those parts and pieces of the puzzle together… it was just a matter of timing.  Once they got that done, signed and announced, it was a win/win for everybody.  It’s a win for Brian, it’s a win for Michael Waltrip Racing, and it’s a win for myself to have the opportunity to be a small part of Stewart-Haas.
“I’m not sure I can describe what it means to me that Tony wanted me to do this,” said Martin. “He is definitely one of my heroes. I’m a little bit nervous about today, because I feel like it is an extraordinary challenge. I see a lot of faces I’m not sure I can put names to just yet.  This is going to be an action-packed two and a half hours (of practice) today, then we are going testing next week at Richmond. I think that will help us start getting in the groove, and as we go forward I think things will smooth out.  It’s been pretty intense so far this week.”
Posted by Dave Moody at 2:34 PM