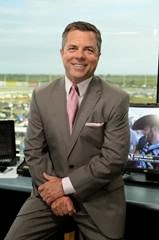 Allen Bestwick has agreed to a new multi-year deal with ESPN to become lap-by-lap announcer for ABC’s telecasts of the IndyCar Series, including the Indianapolis 500, in 2014. The veteran broadcaster also will branch into other sports beginning in 2015.


Bestwick, who has been part of ESPN’s NASCAR coverage since 2007, will continue as the anchor for the network’s NASCAR Sprint Cup and Nationwide Series telecasts in 2014, the final year of ESPN’s contract to televise live NASCAR racing.
In 2015, in addition to IndyCar Series racing, Bestwick also will call play-by-play on college football telecasts for ESPN, a variety of collegiate sports on the upcoming SEC Network, and on ESPN interactive television productions of golf and tennis.
“Allen Bestwick has been a valuable contributor to our NASCAR coverage the past seven years and we’re delighted that he will be bringing his versatility and talents to our IndyCar telecasts as well as other sports for years to come,” said John Wildhack, ESPN executive vice president, programming and production.
Though closely associated with motorsports for most of his 27 years in broadcasting, Bestwick also has called football, track and field and hockey, among other sports, during his career. He worked a college football game for ESPN in November.
“I love sports – all sports,” Bestwick said. “This is a tremendous opportunity to call the Greatest Spectacle in Racing, a childhood dream come true, and some other sports that I enjoy as well. And we still have two NASCAR champions to crown on ESPN in 2014. I’m thrilled to be going into the future with ESPN.”
Bestwick started broadcasting in 1986 covering live NASCAR races as a turn announcer for MRN Radio. He worked for MRN for nearly 15 years, including as the play-by-play announcer from 1988-2000 and host of the network’s daily news program.
Bestwick, who also worked briefly in New York for ABC Radio, made his television debut in 1995 on the original NASCAR Today program on ESPN and joined the SPEED Channel in 1996 as the host of Inside NEXTEL Cup Racing, a post he held for 10 years. He started pit reporting for TBS and TNT in 1997. While continuing to work in radio, Bestwick joined NBC in 1999, covering NASCAR races as well as American Le Mans Series races, arena football and track and field events. He was part of NBC and TNT’s NASCAR coverage from 2001-2006, both as a pit reporter and lead announcer.
Bestwick has been the anchor for ESPN’s NASCAR coverage since July of 2011. He previously was host of the pre-race NASCAR Countdown program from mid-2007 through mid-2011 while also calling selected races from the booth, and was a pit reporter for part of the 2007 season.
ESPN’s NASCAR coverage for 2013 begins with the NASCAR Nationwide Series season opener at Daytona International Speedway on Feb. 22, with telecasts of the final 17 NASCAR Sprint Cup races beginning July 27 at Indianapolis.
On May 25, ABC will televise the Indianapolis 500 for the 50th consecutive year. The network also will televise four other IndyCar Series races as well as Indianapolis 500 qualifications. Coverage begins with the March 30 season opener in St. Petersburg, Fla.
Posted by Dave Moody at 11:14 AM