Gaughan Returns To RCR In 2015 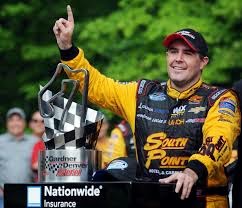 
"The South Point Hotel & Casino is pleased to return as primary sponsor of the Richard Childress Racing No. 62 Chevrolet Camaro in the 2015 NASCAR XFINITY Series season." said Michael Gaughan, owner of the South Point Hotel & Casino. "Watching Brendan and the RCR team in victory lane this season has been a lot of fun for South Point and the Gaughan family. We are looking forward to more great accomplishments next season."
South Point Hotel & Casino's partnership with Richard Childress Racing began in 2012 with Gaughan running a limited Nationwide Series schedule and eight NASCAR Camping World Truck Series races. The partnership continued in 2013 with a full time Camping World Truck Series schedule where the team finished seventh in the driver championship point standings. South Point Hotel & Casino made the full time move to the Nationwide Series for the 2014 season.
"Returning to victory lane this season has been a big morale booster for not only me but for my team as well," said Brendan Gaughan. "For the remainder of the year we will continue to learn and find things that work to get us a leg up on the competition for next season. I can't wait for next year with the No. 62 RCR team and to contend for the XFINITY Series championship."
The Las Vegas-native collected his first-career win at Road America in June, which was only the third time in NASCAR history a race has been run in the rain. This victory came after he made 98 Nationwide Series starts. Gaughan returned to victory lane three months later at Kentucky Speedway in September. With only three races left this season, the 39-year-old driver leads the Nationwide Series regulars with most green flag passes (1,813), earning two top-five and six top-10 finishes with 54 laps led.
Gaughan's two wins add to RCR's 2014 Nationwide Series overall accomplishments, which include four victories and four pole awards.
"Michael, Brendan and the entire Gaughan family have been great to work with and I am very pleased we can continue our winning ways with them next season," said Richard Childress, chairman and CEO of Richard Childress Racing. "Brendan is an asset to RCR and his wins this year show what hard work and dedication can achieve."
Posted by Dave Moody at 10:10 AM