Marty Smith Will Remain With ESPN 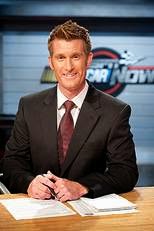 Marty Smith, who has served as lead NASCAR reporter for SportsCenter and other ESPN platforms since 2007, has agreed to a new contract and will remain with ESPN as a bureau reporter.


One of the most eloquent and informed reporters in the sport, Smith will travel from his base in Charlotte, N.C., to cover a variety of sports for the network, including NASCAR, pro and college football and basketball, and other sports. He also will still write for ESPN.com on NASCAR and other topics and will continue the popular Marty & McGee podcast on ESPN.com, which he co-hosts with ESPN the Magazine senior writer Ryan McGee.
Smith’s new role officially begins January 1, but as he focuses on covering the final four weeks of the NASCAR season, he will be expanding his duties, including reporting on the Oct. 28 home opener for the NBA’s Charlotte Hornets. ESPN is in its final year of televising live NASCAR racing.
Prior to joining ESPN, Smith was a senior writer for NASCAR.com, an analyst and host on the former SPEED Channel and a NASCAR analyst on Fox Sports Net. A Radford University graduate, Smith covered sports for daily newspapers in Roanoke and Lynchburg, Va., before joining NASCAR.com.
Over the past eight years, Smith has broken multiple big news stories from the NASCAR world on various ESPN platforms. In addition to reporting for SportsCenter and writing news and features for ESPN.com, Smith also has contributed to ESPN’s NASCAR event television coverage with numerous unique features and extensive, in-depth and revealing interviews with nearly every top driver in the sport.
This week, Smith is preparing a feature for SportsCenter on the relationship between Kansas City Royals manager Ned Yost and the late seven-time NASCAR Sprint Cup champion Dale Earnhardt and will then report from the NASCAR event in Martinsville, Va., this weekend.
"I'm so fortunate to have a challenging, rewarding job that allows for creativity, and to have colleagues and bosses that believe in my approach and my ability,” said Smith. “I love sports and the intensity therein, and I'm thrilled by the prospect of diversifying in the coming years, while still maintaining my passion for motorsports. I appreciate the opportunity, and I don't take it lightly."
Best wishes, Marty. ESPN's gain is NASCAR's loss.
Posted by Dave Moody at 5:15 PM