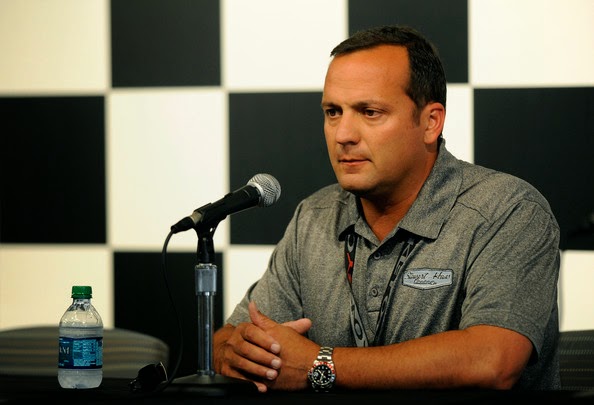 Stewart Haas Racing Director of Competition Greg Zipadelli met with the media today at Martinsville Speedway to explain the team’s decision to swap crew chiefs between their No. 10 and No. 41 Chevrolet teams, beginning next weekend in Texas.


Veteran Tony Gibson will work with driver Kurt Busch, while Daniel Knost climbs atop the pit box for Danica Patrick.
“We are looking to try to get both teams to be a little more consistent,” he said. “They have had speed throughout the year, but haven’t necessarily put the whole season together… at the level we expect from them. Tony Gibson has got a lot of experience (and) that group has been with a lot of veteran drivers.  We just felt like it was worth moving him over to Kurt.  We feel like his experience will help put that group together and get the finishes that we need out of that team.
“As far as Daniel, he is a young aggressive, very smart engineer.  Danica is used to dealing with engineers from her background.  Actually, a while ago, she talked about having the opportunity to work with a younger engineer and build the relationship over time (and) I feel like it was the time to do it.
“This is a good opportunity for us to switch things up for Texas (and) the last three races and see how things go.”
Zipadelli candidly stated that Gibson may be better equipped to deal with the temperamental Busch than Knost has been.
“(Gibson) dealt with Mark Martin, Dale Earnhardt, Jr. (and) Michael Waltrip back in the day, so I think he has heard it all,” said Zipadelli. “He'll let it go in one ear and out the other. Because of his experience (and) the time he's been in the sport, he will probably be able to handle that a little bit better.  He's been around a long time and dealt with a bunch of different people.
He's kind of toward the end of his career… not all revved-up and young and worried about anything other than trying to go out and win races. In all honestly, it is a really good opportunity for him with the cars he's been building to go out and try to win a few races in the next year or two."
Zipadelli said that despite being named only an interim crew chief for Patrick’s operation, Knost is the leading candidate for that post in 2015.
“I would like to believe that Daniel will have that position,” he said. “I think it is just kind of `wait and see’ how Danica works with him and how they get along. Daniel is going to be with SHR for a long period of time.  It’s not a matter of whether he doesn’t do a good job there.  He has done a great job.”
He said he is unsure why Knost and Busch failed to bond as a team, adding, "They are just two different people. Daniel is a very methodical guy. He's spent a ton of time in college learning the things that go on behind the scenes. Kurt is kind of more of an immediate `I want an answer,’ results kind of guy. Daniel has done a great job, (but) we just can't wait another year for that to continue to grow. It is as simple as that."

Zipadelli said the first-year crew chief was “really fed to the wolves” this season, being thrust into a –profile crew chief’s role with no experience. “He was a guy without a lot of experience, (but) he won a race and made the Chase. It’s just been and up and down year.  I think he has a lot of potential, (so) we put him with Danica.  I think they have got the opportunity to learn and grow together as Danica continues to grow every week.


“I think long term, it’s the right thing,” he said. “There might be a step backwards (for Patrick) while they get to learn each other and grow. But long term, two years from now, I think the personalities between Daniel and Danica will work together much better.  I think the same thing will happen on the No. 41 car.
“That is a team that we have to get going immediately,” he added. “There isn’t a lot of time for growth.  Kurt is in the prime of his career (and) we know that he can go out and win races at every race track we go to.  We have got to give him that.”
He said that race day communication with an engineering-based crew chief is “what (Danica) grew up with. She came from IndyCar (and) that is what they had.  The way they do things is a little different than the old-school racer does things.  She wants to know more about what they are doing… just trying to learn.
“She has made a ton of progress.  Her speed on the race track (and) her qualifying are better, but our race finishes aren’t.  At the end of the day, that is really what counts.  So how do we help and encourage that?  Right now I think that this is a pretty good change (and) very positive for our company as a whole.”
Posted by Dave Moody at 2:09 PM