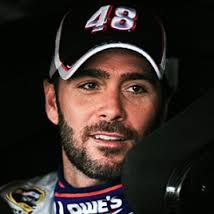 Despite effectively needing a win Sunday to advance to the Eliminator Round, Johnson spoke optimistically of his chances.


“I’m excited to go racing,” he said. “Our plate program has been pretty strong and our car has been fast. We won a few plate races last year and we certainly need to do that this (weekend) to keep my championship hopes alive. When I reflect back on the Chase so far, we’ve certainly not had the speed that we wanted in our cars. But… we’ve kept ourselves in the mix when we had two bad races. Two bad races would have eliminated me from any opportunity of winning a championship in each previous format, so I feel like I have a third opportunity this weekend.
“Granted, it’s a tough one and a lofty goal,” he said. “There are many other guys out there with the same goal, not only from a Chase situation but also trying to win a race this year. I’ve got a lot of work ahead for myself and this team this weekend, so we’re ready for the challenge. We’ll get out there to work and see what happens.”
In terms of strategy for Sunday’s race, Johnson said he will be forced to play it by ear.
“I’ve put a lot of time and thought into my approach for this weekend (and) there really isn’t a clear vision for how to make it work,” he admitted. “Racing for it can get you in trouble. If you ride, at some point, you have to go to the front.
With this rules package, it’s much more difficult to get track position. It seems like with maybe three pit stops to go, you need to have control of the race and maintain it; least be in first or second (in) line and give yourself a chance to win. I don’t know… I really don’t. Maybe being cautious early will buy us some time and keep us on the road. (but) from the halfway point of the race on, you have to fight for track position if you want to win.
“I can promise you that with four guys needing to win to transfer, at the end of the race there will definitely be some racing,” he said. “It may be the four of us on the bottom trying… to get to the front. But there are at least four that have a really good reason to take chances, be aggressive and try to win. I’d guess it will be an exciting race but again we just don’t know until we get out there.”
Asked about the current relationship between himself and crew chief Chad Knaus, Johnson said, “Frustration is high, for sure. Chad and I have had peaks and valleys in our relationship. We’ve had times where there has been plenty of frustration on the radio, but who we are, what we are as a team and the way our relationship works… things are still as they have always been.
“It isn’t fun, and… last weekend there was plenty of color on our channel. It just comes with the territory. We’re not happy with where we’re at, and I don’t know why we would be. It’s unfortunate that sometimes those things are aired on the radio and innocent bystanders hear them – children and others – but that’s just part of it.”
Johnson understands there is a chance he will fail to advance into next week’s Eliminator Round, and said the events of Sunday afternoon will determine how he approaches the remainder of the 2014 campaign.
“Depending on how this weekend goes, we’ll know what the rest of the year looks like for us,” he said. “If we don’t win, it will be in our best interest to look at 2015 and what we need to do on all fronts, including the rules package. Our vision will shift at that point and try to get a head start on the field and start where we need to be.
“At the end of a race... I have to win. My quest to win a seventh championship is the thing I’m most concerned about. I know my teammates are going to think the same way and have the same approach. We’re out there to win for our teams and ourselves to move on and have a shot at the championship.”
Posted by Dave Moody at 4:13 PM