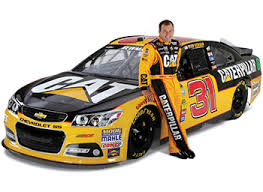 One week ago, Ryan Newman did the math.


The Purdue University engineering grad responded to a media question about the value of wins in the 2014 Chase by saying a trio of eighth-place finishes would be sufficient to advance to the Eliminator Round. Newman stuck to that assertion today, telling reporters, “Everybody needs to win. But you do the math… there are eight slots open and three races. So that means three winners potentially… at most.
“But there will be five guys who get in on points. The consistency needs to be there. I think the next bracket will be the most challenging, where wins will be most important. Then obviously, there’s Homestead.”
Newman also disputed the perception that week’s race at Talladega Superspeedway will be the most nerve-racking of the Chase.
“I don’t think there is more pressure,” he said. “There are more questions. We saw some guys at Kansas (have) some misfortune that don’t usually have misfortune. The 88, the 2, the 48; those guys aren’t backed into a corner, but they have their work cut out for them. There are only two races left and you have three guys in trouble. There are going be some different approaches at Talladega, no doubt. But I don’t see it as added pressure. I don’t see it really any different (than ever).
“I take the same approach to the first Talladega as I do the second Talladega. You’re still racing for points, positions and obviously a win to put yourself into the Chase; let alone the next bracket.”
While most prognosticators predict a vintage Talladega “Big One” next weekend, Newman said there is no way to know what will take place.
“It is what it is,” he said. “I don’t know if there is an answer. We could see 188 laps of green-flag (racing). It has happened before and it could happen again. You never know if there is going to be a big crash, if it’s going to be your fault, or if you’re going to get caught up in someone else’s mess.
“It is the last race of the Chase, but no difference in the first race or the last race. You still have the opportunity.”
Posted by Dave Moody at 4:22 PM