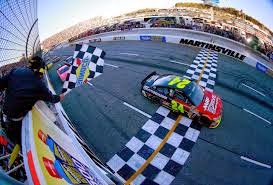 
The California native is an eight-time winner at the venerable Virginia half-mile, and said today that he couldn’t be happy to return there this weekend.
“I can honestly say, never has (Martinsville) been more important than this weekend,” he said. “I haven’t gone back through the stats of exactly what this track meant to my championship runs in the past, I just knew that it has always been a track that I’ve had confidence in. Our cars are good, our team is solid here and we come in believing that we have a chance at winning.
“This weekend, with the way this format is… I don’t feel like we’re in a ‘must win’ situation. I think we’re in a situation where this is a great track where we can win. But getting a really good finish and getting started off right is also important. So we’re very focused on this track. We tested here and we’ve had a good day so far. Hopefully we can end the day on a positive note, continue to carry the momentum we have here in Martinsville and really put our stamp on our… chances for Homestead.” 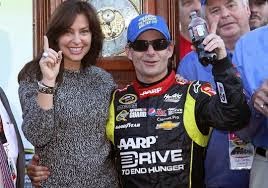 Asked if he feels lonely after having all three of his Hendrick Motorsports teammates eliminated from title contention last weekend at Talladega, Gordon said, “I don’t. We always share information, work together and have our debriefs. The crew chiefs are constantly talking about set-ups and how to get better as we go into each race weekend. I feel like that will continue.
“I think that the only difference is that we’re not racing them for the championship. When you race for a championship, every split second counts and you race one another extremely hard. And if those guys have a chance at winning they’re still going to race hard. (But) beyond that, they’re very supportive.
“They’ve mentioned to me already of how much they want to see us get that championship. So, it’s great to have their support.”
Gordon said he is unsure whether the three former Sprint Cup Series champions still in the 2014 hunt will have an advantage the rest of the way.
“It’s me, Brad Keselowski, and Matt Kenseth,” he said. “My championships were won under a completely different format (and) all of them were under a different format than this one, So, I don’t know if it gives an advantage to anybody. The team that handles pressure well and (has) these upcoming tracks suit them well; those are the ones with the advantage.
The four (teams) that have been the strongest teams all year long are in there. That’s the No. 22 (Joey Logano), the No. 2 (Brad Keselowski), the No. 4 (Kevin Harvick), and ourselves.
“I’m not saying that’s going to be who makes it to Homestead, but those, to me, are the teams that have the best chance.”
Posted by Dave Moody at 4:41 PM