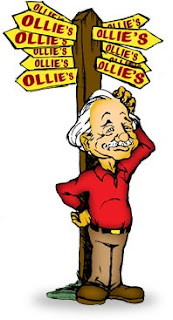 Ollie's Bargain Outlet will join Tommy Baldwin Racing as primary sponsor for the #36 Ollie's Bargain Outlet Chevrolet driven by Dave Blaney at the Daytona 500. The sponsorship will be the third venture into the NASCAR Sprint Cup Series for one of America's largest retailers of closeouts, salvage and surplus merchandise. The Pennsylvania-based company currently operates 114 stores in 12 states.

"We're excited to support Dave Blaney and TBR and to have a part in the Daytona 500," said Mark Butler, President and CEO of Ollie's Bargain Outlet. "A lot of our customers are NASCAR fans, so it will be great for them to see our car out on the track."

Blaney was forced to qualify into last season's Daytona 500, before leading three laps and finishing 26th in the final rundown. He will once again attempt to qualify for the 2012 “Great American Race;” potentially his 23rd career start at the 2.5-mile superspeedway.

"We are thrilled to have Ollie's come on board for this year's Daytona 500," said team owner Tommy Baldwin. "We were pleased with our superspeedway efforts last year and feel like we can build on that this season. With Ollie's joining for the biggest race of the season, it is a win-win for all of us. They have worked with Dave in the past, and we are excited to have them as part of our program at TBR."

Blaney will take part in Daytona 500 time trails on Sunday, February 19 before competing in the Gatorade Duel at Daytona on Thursday, February 23.
Posted by Dave Moody at 3:31 PM