Jason Bowles will compete for 2012 NASCAR Nationwide Series Rookie of the Year honors aboard the MacDonald Motorsports American Majority/PledgeToVote.com No. 81 Dodge Challenger. 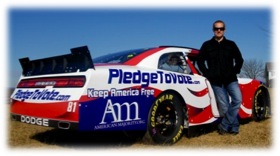 Originally from Ontario, California, Bowles made a name for himself in the West Coast open wheel and road racing ranks as a teenager before transitioning to stock cars in 2006. After a single season in Late Models at Toyota Speedway in Irwindale, CA, Jason moved up to the NASCAR K&N Pro Series West in 2007, earning a pole position, two wins, and eight Top-5 finishes en route to a third place finish in the championship standings. He eventually claimed the 2009 West Series title, capturing three poles, three wins, and 10 Top-5 finishes along the way. He won the 2011 Toyota All Star Showdown driving for Rusty Wallace Incorporated and ran three NASCAR Nationwide Series races for RWI last season with a best finish of 13th in August at Circuit Gilles Villeneuve in Montreal.

“I'm super excited about the opportunity with American Majority Racing and MacDonald Motorsports,” said Bowles. “I look forward to working with them all year and having a successful 2012 season. I can't thank them enough for support they have shown so far leading up to Daytona. It's going to be an exciting year!”

Team owner Randy MacDonald said, “I think Jason is going to be an excellent fit for our team and our sponsor, American Majority. He had an enormous amount of success running the K&N Pro Series and deserves a shot in Nationwide. I’m hoping to bring our team to the next level and compete for top-10 finishes this year with Jason, and that will be our goal on each race weekend.”

John Monsam will return as the crew chief, after working atop the pit box for the final seven races of last season. “We have been working really hard this off-season to make our team as strong as possible for the 2012 season,” he said. “Bringing on Jason as the driver and American Majority as a sponsor is going to be big for our team, and I can’t wait to get to Daytona to get this season started.”

American Majority’s new NASCAR promotion will include the launch of www.pledgetovote.com, with contests and NASCAR ticket giveaways throughout the season, along with a state-of-the-art display on vendor row providing race fans with the ability to register to vote, race iRacing simulators, play games, win prizes and have their picture taken with a replica of the American Majority No. 81 car.

Bowles and the No. 81 American Majority Racing team will kick off the 2012 season in the DRIVE4COPD 300 at Daytona International Speedway on February 25th.
Posted by Dave Moody at 9:55 AM