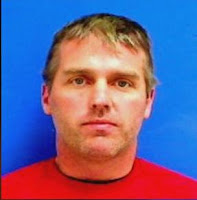 WSOC-TV in Charlotte, NC, is reporting that suspended NASCAR driver Jeremy Mayfield was indicted today for possession of stolen property, in the aftermath of a Nov. 1 raid on his Catawba, NC home.

Catawba County Sheriff's deputies executed a search warrant at Mayfield's home last Nov. 1, after receiving a tip that there was stolen property inside the residence. Once inside, deputies discovered approximately 1.5 grams of methamphetamine and a number of items believed to be stolen. He was charged only with possession of methamphetamine at the time, pending verification that the items were indeed stolen. Sheriff's deputies also confiscated approximately 50 guns.

Mayfield’s attorney said at the time that his client was unaware of more than $100,000 in stolen property found in an out-building and storage trailers on his property, or the drugs discovered in a safe in his home. Authorities have continued to investigate the case, saying additional charges were likely. Today, Mayfield was indicted on three counts of possession of stolen goods and one count of obtaining property by false pretenses. He remains free on $3,000 bond.

Mayfield was suspended indefinitely from NASCAR after failing a random drug test in May of 2009, but has steadfastly maintained his innocence, claiming his test results were falsely skewed by his use of Adderal prescribed for Attention Deficit Disorder and the over-the-counter allergy medication Claritin D. He has accused NASCAR of altering the results of his drug test and failure to follow proper drug screening protocol.
Posted by Dave Moody at 2:04 PM