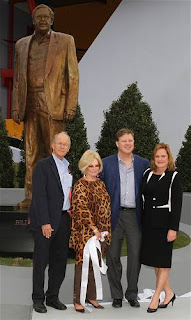 France is remembered as the man who followed his visionary father at NASCAR's helm, guiding the sport through an unprecedented era of growth to its highest levels of popularity. He combined pragmatism with optimism in steering the sport, setting the stage for it to become the multi-million dollar entity it is today.

The statue was created by sculptor John Lajba.
Posted by Dave Moody at 12:00 PM