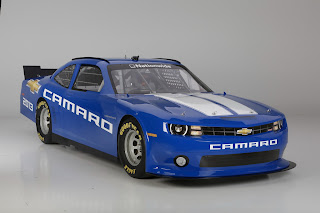 Chevrolet will have a new entry in the NASCAR Nationwide Series in 2013. The Chevy Camaro will make its series debut next February at Daytona International Speedway.


“Chevrolet is proud to bring the Camaro to the NASCAR Nationwide Serie sin 2013,” said Jim Campbell, vice president, Chevrolet Performance Vehicles and Motorsports in a surprise announcement today.“ The Camaro Nationwide race car incorporates many of the distinctive styling elements of the production Camaro, including the unique power-bulge hood and deep recessed grille. In addition, the design incorporates the distinctive halo light rings, dual-port grille appearance and the gold bowtie.”


“Our team of Chevrolet designers and aerodynamic engineers did a fantastic job capturing the great looks and styling cues of the production Camaro, while providing our NASCAR Nationwide teams with a highly competitive aero platform,” said Pat Suhy, manager of Chevrolet Racing Oval Track Group. “For the remainder of 2012,our engineers will be busy working with our Chevy teams on wind tunnel and on-track testing to fine-tune the car in preparation for next year. It will be great to see Camaro compete on the track against its showroom competition, starting with the2013 season opener at Daytona.”


“We have been working on this new Camaro for over a year and I am excited to have it approved by NASCAR for 2013 competition in the Nationwide Series,” said Shane Martin, program manager, Chevrolet NASCAR Nationwide Series. “This car has a bold look that will be reinforced by its performance on the race track.”
Posted by Dave Moody at 2:17 PM