Craven Will Remain With ESPN 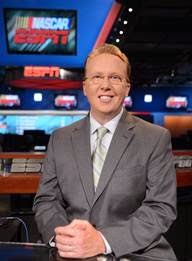 Former NASCAR Sprint Cup race winner Ricky Craven has agreed to a new contract and will remain with ESPN as NASCAR analyst for SportsCenter and other ESPN news platforms.


Craven, who started with ESPN as an analyst in 2008, will make regular appearances in the ESPN studio around NASCAR Sprint Cup races and to analyze breaking news as warranted. ESPN is in its final year of televising live NASCAR racing.
“Our news and information platforms will continue to provide NASCAR fans with coverage of the sport and insightful analysis going forward,” said Michael Shiffman, senior coordinating producer, SportsCenter. “Ricky Craven has proven to be a valuable voice and analyst and we are very happy that he is remaining part of the ESPN team into the future.”
During his driving career, Craven won the rookie of the year titles in both the NASCAR Nationwide Series (1992) and NASCAR Sprint Cup Series (1995). He won races in both series as well as in the NASCAR Camping World Truck Series. He also won the 1991 championship of what was then known as the NASCAR Busch Grand National North Series.
In the NASCAR Sprint Cup Series, the Newburgh, Me., native won in what is tied for the closest recorded finish in NASCAR history when he edged Kurt Busch at the finish line by .002 second at Darlington, S.C., in 2003. His last fulltime season of driving was 2005.
As the 2014 NASCAR season heads toward the finish line, NASCAR fans will see Craven and hear his analysis on SportsCenter on the day before, day of and day after each of the three remaining races in the Chase for the NASCAR Sprint Cup.
“I’m completing my seventh year with ESPN and I’ve been challenged and rewarded,” said Craven. “I’ve thoroughly enjoyed my experience and greatly appreciate the vote of confidence.”
Posted by Dave Moody at 10:41 AM