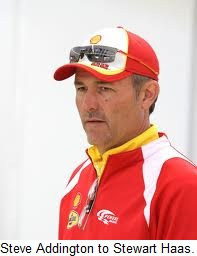 Steve Addington, winner of 16 NASCAR Sprint Cup Series races as a crew chief, has been named to the same position for three-time Sprint Cup champion Tony Stewart and the No. 14 Office Depot/Mobil 1 team of Stewart-Haas Racing, effective immediately.

The Spartanburg, S.C., native is only the third crew chief Stewart has had during his 13-year Sprint Cup career, with the announcement coming just a week after Stewart captured the 2011 Sprint Cup title.

“I know Steve well and I know how he goes about setting up a race car,” said Stewart, who worked with Addington from 2005-2008 at Joe Gibbs Racing. “My comfort level with him is already strong. He balances the technical part of our sport with the real-world experiences we get at the track, and that will allow for a smooth transition as we prepare to defend our title in 2012.”

Prior to joining the Sprint Cup ranks, Addington spent 15 seasons as a crew chief in the NASCAR Nationwide Series, 11 of which came with driver Jason Keller where he won 10 races, 11 poles and scored 69 top-five and 122 top-10 finishes.

“Tony and I are a lot alike and we’re able to push each other,” Addington said. “I saw how he worked when we were at Gibbs together and I’m not surprised at all at the success he’s created at Stewart-Haas Racing. He expects a lot and he knows a lot. His talent behind the wheel is obvious, but his ability to motivate and get everyone to believe that whatever goal they set is attainable is something every crew chief wants, and I plan to make the most of it.”

“Steve has proven himself everywhere he’s been,” Stewart added. “Our expectation when we unload each weekend is to win, and that’s Steve’s expectation, too. Getting there is never easy, but we’ve both been around long enough to know what it takes to be successful.”

Addington replaces Darian Grubb, who served as Stewart’s crew chief since the inception of SHR in 2009. “Darian was a very important part of the success we’ve had at Stewart-Haas Racing,” said Stewart. “I’m very proud of everything he helped accomplish, especially this year when we all rallied to win the championship. He’s a great person and I know he’ll continue to be successful in this sport.”
Posted by Dave Moody at 11:40 AM