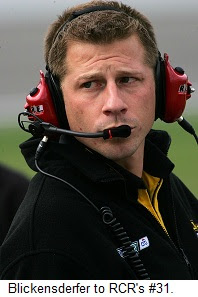 Richard Childress Racing has named Drew Blickensderfer as the crew chief for the No. 31 Caterpillar/Wheaties Racing team with driver Jeff Burton for the 2012 NASCAR Sprint Cup Series season.

Luke Lambert, interim crew chief during the latter part of the 2011 season for the No. 31 team, will assume a yet-to-be announced new position at RCR.

Blickensderfer begins his RCR career after nearly a decade with Roush Fenway Racing. He spent the 2011 NASCAR Sprint Cup Series season leading the No. 6 team and has been a crew chief, in the Sprint Cup and Nationwide Series, since 2007.

"I'm excited about the move to RCR and the opportunity to help lead Jeff Burton and the Cat/Wheaties Racing team back into Chase contention," said Blickensderfer. "I was around Jeff briefly at RFR and always admired and liked him. He's a very talented driver and I look forward to working him and the rest of the No. 31 team in 2012."

Burton qualified for the Chase for the NASCAR Sprint Cup from 2006-2008 and 2010. He finished 20th in the final 2011 driver championship point standings.

"Drew is a strong leader and will be a great complement to the Caterpillar/Wheaties Racing team," said Childress. "He's won some big races, including the 2009 Daytona 500, his first race as a Sprint Cup Series crew chief. There's every reason to believe the combination of Jeff and Drew will be a successful one."

Richard "Slugger" Labbe will remain as the crew chief for the No. 27 Menards Racing team in 2012. It was announced previously that crew chief Shane Wilson will crew chief the No. 29 Budweiser/Rheem/Jimmy John's team for driver Kevin Harvick. Gil Martin, the No. 29 team crew chief since May 2009 and a crew chief at RCR since August 2000, has been named director of team operations.

Further personnel changes within RCR's competition department will be announced in the coming weeks.
Posted by Dave Moody at 5:06 PM