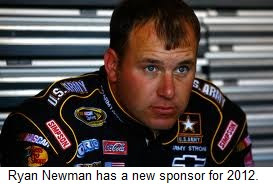 “We’re thrilled to partner with Stewart-Haas Racing and Newman who are recognized for their leadership and performance on and off the track,” said Mike Kappitt, chief marketing officer of Outback Steakhouse. “It’s especially meaningful to us to continue Outback’s longstanding commitment to supporting troops and their families by being a sponsor on the No. 39 U.S. Army Chevrolet.”

Since first opening in 1988, Tampa, Fla.-based Outback Steakhouse has hosted military events and initiatives all over the country and abroad including its "Thanks for Giving" program, which over the last two years has donated $2 million to Operation Homefront, a nonprofit organization that supports military troops and their families, and its Operation Feeding Freedom initiative that sends teams of Outbackers overseas to feed American troops stationed abroad.

“I’ve always been a huge fan of Outback Steakhouse, and I know why it’s been voted the best steak year in and year out,” said Newman, winner of 15 Sprint Cup races, including the 50th Daytona 500 in 2008. “They have a quality product that I’m very familiar with and we’re certainly proud to be representing Outback Steakhouse on the racetrack.”

To officially launch the new partnership, Outback Steakhouse’s logo, along with a special message to United States Veterans, will be featured on the decklid of Newman’s No. 39 U.S. Army Chevy during this weekend’s Sprint Cup event at Phoenix International Raceway. Fittingly, the U.S. Army Chevy carries a special paint scheme during this Veterans Day weekend at Phoenix honoring Army Vietnam Veterans. A collage made up of hundreds of photos of those who served is incorporated into the car’s design.

“We’re honored to have Outback Steakhouse join Stewart-Haas Racing,” added team owner Tony Stewart. “The company’s reputation for quality and great service is second to none in the restaurant industry, and it’s a true pleasure to be associated with a company and a product that is admired by so many, including myself. We’re looking forward to doing some great things together on and off the racetrack.”
Posted by Dave Moody at 3:01 PM