Edwards Is NASCAR's Other Champion

Carl Edwards lost the closest championship in NASCAR history Sunday night at Homestead Miami Speedway, leading a race-high 119 laps and finishing second to rival Tony Stewart in the title-deciding Ford 400. He and Stewart tallied an identical 2,403 points over the 10-race Chase, with Stewart claiming the Sprint Cup on a tiebreaker.

If there were a trophy for class, however, Edwards would have taken it, hands down.

As his Roush Fenway Racing Aflac Ford crossed beneath the checkered flag Sunday, just 1.5 seconds too late to realize his season long championship dream, Edwards spoke immediately to his team, hailing them for their hard work over the last 10 months, urging them to “keep your heads up” and promising to “go home and work and beat them next year.” He spoke directly to crew chief Bob Osborne on the cool down lap, calling him “the best on pit road," then exited his racer to deal with the media.

He waited patiently while third-place finisher Martin Truex, Jr., answered his post-race questions in the deadline room, then fielded dozens of his own; describing the toughest, most demoralizing night of his career with an uncommon degree of poise and grace.

When he mourned, he did so for his team, not himself. “As tough as this is for me, it’s tougher for those guys,” he said. “(They're) the guys that prepare these cars and determine which things we’re gonna work on through the year and what strategies we’re going to use. They make some very, very big decisions that they can't turn around and change in a heartbeat.

“As a race-car driver, I can make quick decisions out there and I can fix things and make things happen. They make some very, very thought-out decisions, and I’m sure their disappointment is as great -- or greater -- than mine.” 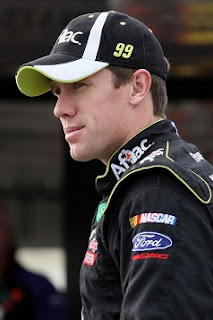 After speaking so confidently throughout the Chase, the Roush Fenway Racing driver admitted after the race that he was prepared for the possibility of failure. "I knew this was a possibility,” he said. “I was prepared for this. I told myself and my family that the one thing I am going to do is walk back to that motor home -- win, lose or draw -- and be a good example for my kids. We talked about it before the race... I’m not to go back and tear the door off the motor home.

“As painful as this is right now, I know we are fortunate to go to Daytona and start all over again.”

Edwards’ grace under fire was not lost on Stewart, who recalled his post-race conversation with the Missouri native. “You couldn’t ask for a better guy,” said Stewart. “He (said), ‘I hope a year from now, we are in the same battle again just like this. Everyone respects Carl for the person that he is. There have been a lot of things that have happened (in the past) that make you go, `Is there sincerity involved in what he says?' But there were no cameras there when he said that. He just came and talked to me, driver to driver. That means a lot. It shows who he is as a person… and he’ll win a championship.