Busch Blows Up, Addington Bows Out

Kurt Busch is in the public relations doghouse once again. 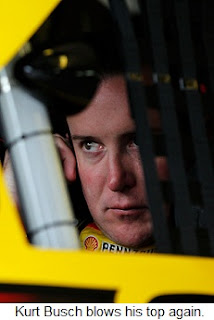 The controversial Penske Racing driver directed a profanity laced tirade at ESPN pit reporter Dr. Jerry Punch Sunday at Homestead Miami Speedway, when Punch attempted to interview him following a transmission failure on his Shell/Pennzoil Dodge. Cameras captured Busch and Punch standing side-by-side, waiting to begin the live interview. Busch was clearly unhappy with the wait and reacted angrily when informed by Punch that debris from his blown transmission had damaged the nose of title contender Tony Stewart’s Chevrolet.

“That just makes me feel a lot better, Doctor,” snapped Busch. “Can you get this motherf--ker out of my face?”

He continued to fume while waiting for the interview to begin, asking, “Why can’t we tape this s--t?” Punch responded that the network preferred to do the interview live, prompting Busch to respond, “Yeah, well I would have liked to do it live f--king 10 minutes ago.”

Tired of Busch’s abuse, Punch walked away, saying “never mind.” As Punch departed, Busch turned and stalked toward his transporter before turning to shout, “Thank you, now get the f--k out of here.” Video of the incident can be viewed by clicking HERE.

The outburst is the latest in a series directed by Busch toward media members, crew members, team management and others. He has repeatedly browbeaten his own pit crew over their in-car radio this season, and his blow-ups reportedly played a major role crew chief Steve Addington's decision not to work with Busch going forward. Addington informed the driver by telephone Monday that he will not return to the crew chief's post next season, and he is widely believed to be heading to Stewart Haas Racing to work for recently crowned Sprint Cup Series champion Tony Stewart.

Addington's departure leaves Busch in the market for a new pit boss, and based on his track record of anger, abuse and mistreatment, that position may not be easy to fill.
Posted by Dave Moody at 12:31 PM