Seven NASCAR Sprint Cup Series teams took part in an aerodynamic test at Daytona International Speedway yesterday, establishing aero parameters for Preseason Thunder testing next January, and ultimately for the 2012 Daytona 500. Job One is the reduction (or outright elimination) of the two-by-two drafting that has dominated recent restrictor plate races at both Daytona and Talladega. 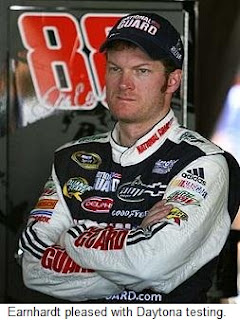 Teams participating in Tuesday's test included Hendrick Motorsports (Dale Earnhardt Jr. and Aric Almirola); Roush Fenway Racing (David Ragan and Marcos Ambrose); Joe Gibbs Racing (Joey Logano); Michael Waltrip Racing (Martin Truex Jr.); and NEMCO Motorsports (Joe Nemechek). The test was delayed by early morning rain showers, with teams kept off the track at 11:45 AM ET. Initial laps were run with a 29/32” restrictor plate and 4½ by 63” rear spoiler; the same configuration used in July's Coke Zero 400. By day's end, the size of the rear spoiler had been reduced to 3” by 62”; reducing rear down force and drag. As expected, those changes produced increased speeds, with cars topping out at more than 207 mph.

Earnhardt Jr., a 13-time race winner at Daytona, called the test "a positive step in finding a solution to the drafting style at Daytona. I did not anticipate finding a magical solution here today, but we will be much better off and a lot smarter about things by having tested," said Earnhardt. "This is just part of the work that needs to get done. There are a lot of creative minds out here. We're learning what we need to know. I think we're all in agreement that we probably won't totally rid ourselves of the tandem racing, but I'm confident we can get to the point where it will not be the norm."

NAPA Toyota driver Martin Truex, Jr. said, "We tried several different packages out there today. What we're trying to do is put an end to this two-car draft, or at least make it so we can only get together for a lap or two and have to switch or run in a pack. NASCAR is being smart about all of this, and they are going through some steps to see if the changes we're making will result in what they think they will."

NASCAR Sprint Cup Series Director John Darby said Tuesday's test should “give the teams more options when it comes to how they draft. We believe we're headed in the right direction on that," said Darby. "We want to be able to reduce the difference in the speeds between the tandem style of racing and more of the pack style of racing and we made a lot of good progress on that here today." 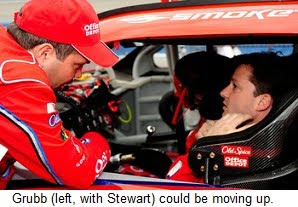 Just days before driver Tony Stewart makes his final bid for the 2011 series championship at Homestead Miami Speedway, the Office Depot/Mobil 1 Chevrolet crew chief fended off questions about his future during a NASCAR teleconference Tuesday. Various rumors have Grubb promoted to Director of Competition at Stewart Haas Racing next season -- replaced atop the pit box by current Penske Racing crew chief Steve Addington -- or even fired outright from the team. He was reportedly told weeks ago at Charlotte Motor Speedway that he will not return as crewchief. Penske Racing holds an option year on Addington’s contract, and sources say team owner Roger Penske has not yet agreed to grant him his release.

Asked about his 2012 plans, Grubb said, “We'll leave that to after Sunday and figure out what's going to happen then. Our goal is to win the championship. We'll decide everything else after that.” Grubb said he has not allowed himself to be distracted by speculation about his future, adding, “We've still got the same goals we've always had; that we want to go out and win the championship. Winning races is the way to do that. What we've done in the last nine weeks (has) shown we have the capability to do that. Hopefully we can continue that streak… and win at Homestead.”

And Finally: NASCAR Nationwide Series veteran Jason Leffler will make his last start in the #38 Great Clips Chevrolet for Turner Motorsports this weekend at Homestead-Miami Speedway. Leffler and his distinctive “faux hawk” hairdo have been the face of Great Clips’ Nationwide program for the last six seasons, and the former open wheel star continues to seek a new ride for the 2012 campaign. He will continue to represent Great Clips in select projects, and his longtime NASCAR sponsor will back his effort in the 2012 Chili Bowl Midget Nationals in January.
Posted by Dave Moody at 11:47 AM