No Lull On The NASCAR News Beat

Roush Fenway Racing has confirmed that an undisclosed number of employees were laid off this week as part of the team’s plan to trim its roster of NASCAR Sprint Cup and Nationwide Series entries. 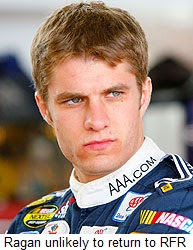 David Ragan’s #6 Sprint Cup Series Ford will likely not return next season due to lack of sponsorship, trimming RFR’s lineup in the series from four cars to three. The team will also cut its involvement in the Nationwide Series, trimming its roster to a single full-time Ford and a second part-time effort. Sources close to the team say more than 100 employees received pink slips this week, but RFR spokesman Kevin Woods declined to confirm that number, and said there could be further cuts, if necessary.

Roush Fenway has full 2012 sponsorship in place for the Sprint Cup Series Fords driven by Carl Edwards and Greg Biffle. Matt Kenseth’s #17 machine is only partially sponsored, but team owner Jack Roush has pledged to keep that car on track, regardless of backing. RFR will field a single Nationwide Series Ford Mustang next season, to be driven by recently crowned series champion Ricky Stenhouse, Jr. or 2011 Daytona 500 champion Trevor Bayne. Woods said a second Nationwide entry will likely be fielded on a part-time basis, dependent on sponsorship.

New Number At MWR: Mark Martin and Michael Waltrip’s Toyota Camry will carry the number 55 during the 2012 and 2013 NASCAR Sprint Cup Series seasons. The number commemorates Charlie Loudermilk’s founding of Aaron’s, Inc. in 1955.

“This is a new era for the Aaron’s Dream Machine,” said Aaron’s Chief Operating Officer Ken Butler. “Our new driver lineup with Mark and Michael created a good opportunity for us to make more changes, including the car number. Every one of our employees knows the significance of the number 55 in our company, and I know they will have pride watching that number compete on Sundays while flying our colors.”

Martin will drive in 25 Sprint Cup events each of the next two seasons, sharing the No. 55 Aaron’s Dream Machine with Waltrip, who will drive seven events with Aaron’s sponsorship. Martin will join Clint Bowyer and Martin Truex Jr. in the MWR stable of drivers. Martin will begin his tenure with MWR at the 2012 Daytona 500, while Waltrip will run the remaining restrictor plate races and the race in his home state of Kentucky. A combination of drivers and sponsors will fill the remaining races. 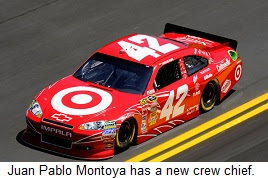 “We are very excited to bring Chris into the organization and to have him work with Juan Pablo,” said team owner Chip Ganassi. “We think he will be a great addition to the Target team and believe his combined engineering and crew chief background should help him work well with both our engineers and competition folks to move our program forward. He has a great reputation in the industry and we are happy to bring him into the mix.”

Heroy joins Earnhardt Ganassi Racing from Hendrick Motorsports, where he served as lead engineer on the No. 5 Chevrolet driven by Mark Martin. “I am really looking forward to working with the guys in the shop at Earnhardt Ganassi Racing to help the 42 improve their performance,” he said. “Juan Pablo is a great driver and they have a lot of great people here, so I am thrilled to get this opportunity.”

Montoya finished the 2011 season a disappointing 21st in the championship standings. The Colombia native has two wins, seven poles, 20 Top-5 and 49 Top-10 finishes in 181 career Sprint Cup starts. Interim crew chief Jim Pohlman, who took over the No. 42 team at the end of July, will remain with the organization.

Lally Inks New Deal: Andy Lally will return to the Grand-Am Rolex Sports Car Series in 2012, after spending this season with the TRG Motorsports NASCAR Sprint Cup Series team. Lally will drive for Magnus Racing in the Rolex Sports Car Series GT class, teaming with owner/driver John Potter after claiming Sprint Cup Rookie of the Year Honors with TRG this season. The three-time Rolex Series champion is Grand-Am's all-time mileage and podiums leader, and a three-time winner of the prestigious Rolex 24 at Daytona.

Smith Suspended: Jack C. Smith, a driver in the NASCAR Camping World Truck Series, has been indefinitely suspended from NASCAR for violating the sanctioning body’s substance abuse policy. He was found to have violated Sections 12-1 (actions detrimental to stock car racing) and 19 (violation of the NASCAR substance abuse policy) of the 2011 NASCAR rule book.
Posted by Dave Moody at 11:12 AM