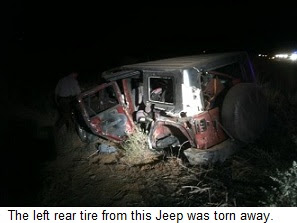 Carmichael said an oncoming vehicle crossed the center line and sideswiped a Jeep, spinning both cars around and tearing the left-rear tire and wheel off the Jeep. The tire/wheel assembly flew into the front of Carmichael's rental car, doing serious damage and deploying the air bags. Carmichael and wife Ursula escaped uninjured.

"It was a nasty crash," said Carmichael. "I jerked the wheel to the right as hard as I could to try and avoid the wrecking cars in front of us, but the loose tire drilled us dead center. There were three kids in the Jeep, and they were all cut up from the flying glass. It was scary, for sure."

Carmichael called the wreck, "Something I never want to experience again. When you're strapped into a race car, you have confidence that you can take a hard hit and still come out OK. But in a street car, it's scary." 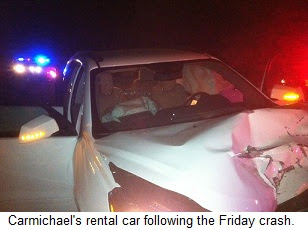 The multi-time former motocross champion said that in all his years of racing, he has only feared for his life once. "I had a wreck on the bike that about halfway through, I realized, `OK, this could be it. I can could end up in a wheelchair from this, or worse.' Last night was the same kind of deal.

"The man upstairs was definitely looking after us, as well as the people in the other cars."

Carmichael is in Phoenix to drive the #34 Turner Motorsports/Monster Energy Chevrolet in this afternoon's "WYPALL 200" NASCAR Nationwide Series race.
Posted by Dave Moody at 1:18 PM