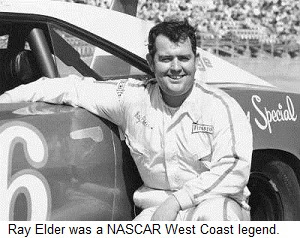 “Ray was a tough competitor and a great representative of NASCAR on the West Coast,” said George Silbermann, NASCAR vice president, regional and touring series. “Our thoughts and prayers are with his family.”

Elder’s team, which included his car-owner father, Fred, and crew chief brother, Richard, were well known as the “Racing Farmers” from Caruthers, Calif. Following their retirement from racing, they continued their farming operation. In addition, Elder and his wife, Pat, ran a mini-mart in Caruthers, located about 15 miles from Fresno.

In addition to his six championships, Elder finished as the runner-up in the final standings in three consecutive seasons; 1966, 1967, 1968. He holds numerous records in the modern era of the series, including the most consecutive starts, with 121, and the most top 10 finishes in a season, with 27.

Elder received the Most Popular Driver Award in the NASCAR K&N Pro Series West eight times, seven in consecutive years. He was among the drivers named to the “NASCAR K&N Pro Series West All-Time Top-10,” compiled by NASCAR and NASCAR Insider in 2005. He was among the inaugural inductees into the West Coast Stock Car Hall of Fame in 2002 and was inducted into the Fresno Athletic Hall of Fame in 1990.
Posted by Dave Moody at 8:17 PM