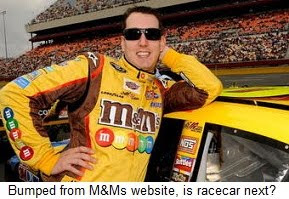 Following Busch's Friday night Camping World Truck Series incident with driver Ron Hornaday, Jr., M&MS' parent company, Mars, posted a statement on the brand's Facebook page saying, "The recent actions by Kyle Busch are not consistent with the values of M&M'S and we're very disappointed. Like you, we hold those who represent our brand to a higher standard and we have expressed our concerns directly to Joe Gibbs Racing."

Monday morning, Busch's name and photo are not included on the M&M's website's "Meet The Crew" page. Crew chief Dave Rogers' profile appears, as do those of over-the-wall crew members Jake Seminara, Kenny Barner, Brad Donaghy, Jeff Fender, Tom Lampe and Nick Odell. Team spokesman Bill Janitz insisted via Twitter today that Busch's profile was never a part of the M&Ms "Meet The Crew" page, and that nothing has been removed.

Mars is a conservative company with a youth-oriented demographic, and multiple sources close to the situation say the company insisted on a clause in their conduct with JGR allowing them to terminate their sponsorship if the embattled driver acts in a manner they consider damaging to the brand.

Team owner Joe Gibbs made it clear Saturday that Busch's latest outburst creates a potential rift with the team's sponsors. He said team officials are "trying to meet with everybody that was affected by this. Obviously, we’ve got a lot of work to do and a lot of people to see, but we’re going to be trying to go through this and handle everything in the right way.”

Gibbs is not the first team owner forced to placate a sponsor unhappy with Busch's behavior. The driver's 2007 departure from Hendrick Motorsports is widely believed to have come at the request of then-sponsor Kellogg's, after the cereal giant grew tired of repeated bad publicity generated by Busch.

Gibbs called this newest controversy "a tough situation for us,” saying that he will once again attempt to deal fairly with Busch, sponsors and team members. “(With) other things that have happened in the past, we’ve tried to handle those things the right way," said Gibbs. "Certainly, that’s what we’re going to try to do with this.”
Posted by Dave Moody at 11:05 AM