There is no quit in Red Bull Racing. Unfortunately, tenacity and determination alone will not be enough to keep the doors open. 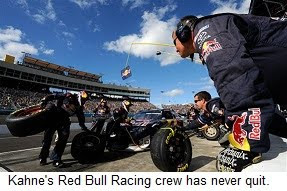 The embattled NASCAR Sprint Cup Series team is awash in uncertainty these days, after team owner Dietrich Mateschitz announced in June that he will shut down the operation at season’s end. Red Bull Racing Vice President Jay Frye has spent the ensuing weeks searching for a buyer or sponsors to keep the team operational in 2012, but the company warned employees in September that it expects to lay off 152 employees when it ceases operation in early December.

The team has not responded like a typical “lame duck” operation. Driver Kasey Kahne has finished sixth or better in six of the last seven races, culminating in Sunday’s emotional victory at Phoenix International Raceway. Kahne trails only title contenders Carl Edwards and Tony Stewart in points earned during the 2011 Chase, and said he takes pride in his team’s ability to overcome adversity.

“Everybody kept working hard,” said Kahne in Victory Lane Sunday. “We're bringing awesome cars to the track. They haven't given up, and they're doing a great job. We've been able to stay focused. It's tough to hear you say it's shutting down in eight days,” he admitted. “Over the last three months, (we) have one of the top five cars in NASCAR. (Now it’s) shutting down, and that's crazy.” 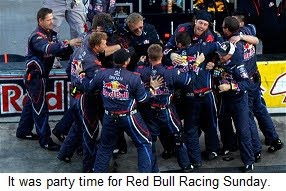 Unfortunately, prospects are bleak that a last-minute buyer can be found. With Kahne and crew chief Kenny Francis departing for Hendrick Motorsports at season’s end, their late-season surge adds little value for a prospective buyer. Teammate Brian Vickers owns the team’s other Sprint Cup Series win, and was a Chase qualifier as recently as 2009. But lately, the former NASCAR Nationwide Series champion has been less team leader than loose cannon, waging a senseless, on-track feud with Matt Kenseth that has produced nothing more tangible than a wrecking yard full of crashed race cars. As talented as Vickers is – and there is no question about his skill behind the wheel – a month filled with road rage incidents makes him a liability in Frye’s effort to find a buyer, rather than an asset.

Sometimes, hard work, determination and desire are simply not enough. Barring an eleventh hour miracle, Sunday’s Victory Lane festivities will mark the final opportunity for anyone associated with Red Bull Racing to celebrate.
Posted by Dave Moody at 11:49 AM