Lally Out At TRG, Bliss To Replace 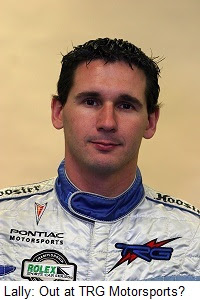 Andy Lally has parted company with the TRG Motorsports NASCAR Sprint Cup Series team, with just one race remaining in the 2012 season.

Lally was unavailable for comment today, but team owner Kevin Buckler confirmed the move, saying that veteran Mike Bliss will be in the #71 Ford this weekend at Homestead Miami Speedway. "Mikes a great qualifier, and we need to have a good run this weekend," said Buckler. "I'm not sure right now whether we will be able to run the entire race, but we're about 3/4 of the way there (on sponsorship)."

Buckler declined to speak specifically on reasons for the driver change, saying, "Let's jut say we're having some internal issues with who's driving the car this weekend, and leave it at that. We're working around some issues with Andy, but that's really all I want to say about it."

Lally said via Twitter this morning, “Had a hard decision to make this morning, but there are just some things you need to do on principle. I’ll keep you updated on things to come.”

Lally is currently 33rd in Sprint Cup Series championship points after failing to qualify last weekend at Phoenix International Raceway. He has run unopposed for 2011 Sprint Cup Rookie of the Year honors, and will secure that title despite his apparent dismissal. The #71 TRG Motorsports Ford recently dropped out of the Top-35 in owners points, and trails the #38 Front Row Motorsports team by 28 points in the battle for the final guaranteed starting spot in the first five races of next season.
Posted by Dave Moody at 12:19 PM