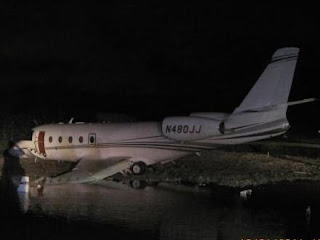 All four people on board -- Hendrick, his wife Linda Hendrick and two Hendrick Motorsports pilots -- were treated and released from Lower Keys Medical Center early Tuesday morning. Linda Hendrick suffered minor cuts and bruises in the incident, while both pilots were evaluated and released without injury. All four have now returned to North Carolina.

The aircraft, which is jointly owned by Hendrick Motorsports and Jimmie Johnson Racing, remains in Key West.
Posted by Dave Moody at 11:07 AM