Nelson Piquet, Jr. will do double duty this weekend, competing in both the NASCAR Nationwide Series and NASCAR Camping World Truck Series finales at the 1.5-mile Homestead-Miami Speedway. Piquet has performed well on intermediate tracks this season, earning five Top-5 and seven Top-10 finishes in 12 starts on 1.5-mile speedways. 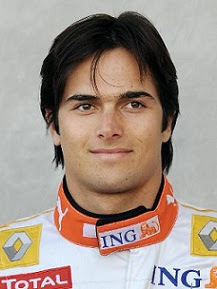 Piquet will close out his first full season of Camping World Truck Series competition in the Kevin Harvick Inc. #8 Piquet Realty Chevrolet Silverado for Friday night's season-ending Ford 200. After 24 of 25 races Nelson sits 10th in the championship and is entrenched in a heated battle with Richard Childress Racing driver Joey Coulter for 2011 Rookie of the Year honors.

Saturday, Piquet will take the wheel of the #30 Turner Motorsports Chevrolet in the Ford 300 Nationwide Series finale. The race will mark Piquet's first Nationwide start of the 2011 season and his second overall. He made his series last year on the road course at Watkins Glen, racing to an impressive, seventh-place finish.

“I am looking forward to this weekend at Homestead," said Piquet. "I seem to do quite well at this style of track and I’ve learned so much during the course of the season. I’m heading into the Truck race with a lot of confidence in myself and my team. We are only five points behind Joey Coulter for the Sunoco Rookie of the Year Award, and I'm hoping that after the race this weekend we'll be able to take over the lead. A solid finish will also help me achieve my primary goal of the season, finishing in the Top-10 in the driver point standings. I’m excited to be getting in a Nationwide car again. Last year I got a good result at Watkins Glen, so if I can get another result like that it will be fantastic.”
Posted by Dave Moody at 5:28 PM