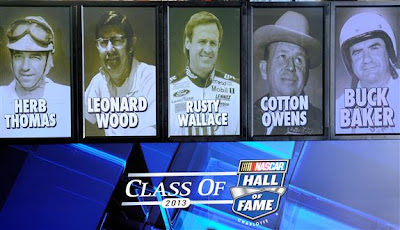 NASCAR announced the 2013 class of inductees into the NASCAR Hall of Fame late yesterday. The five-person class, which will be officially inducted in a ceremony on Friday, Feb. 8, 2013 at the NASCAR Hall of Fame in Charlotte, N.C., consists of Buck Baker, Cotton Owens, Herb Thomas, Rusty Wallace and Leonard Wood.
Members of the 54-member NASCAR Hall of Fame Voting Panel met in a closed session to vote on the induction class of 2013. The announcement was made by NASCAR Chairman and CEO Brian France in the NASCAR Hall of Fame’s “Great Hall.”
Next year’s class was determined by votes cast by the Voting Panel, which included representatives from NASCAR, the NASCAR Hall of Fame, track owners from major facilities and historic short tracks, media members, manufacturer representatives, retired competitors, recognized industry leaders and a nationwide fan vote conducted through NASCAR.COM. The accounting firm of Ernst & Young presided over the tabulation of the votes.
Voting for this year’s class was as evenly distributed as any previous NASCAR Hall of Fame induction class. Herb Thomas and Leonard Wood each garnered 57 percent of the vote, followed by Rusty Wallace (52%), Cotton Owens (50%) and Buck Baker (39%).
For the first time in Voting Day history, there was a tie for the fifth and final induction spot. Voting Panel members chose Baker over Fireball Roberts after a re-vote between the two nominees.
The next top vote getters were Roberts, Jerry Cook and Tim Flock. Results for the NASCAR.COM Fan Vote, in alphabetical order, were Benny Parsons, Fireball Roberts, Wendell Scott, Rusty Wallace and Leonard Wood.
Buck Baker: Elzie Wylie “Buck” Baker established himself as one of NASCAR’s early greats, becoming the first driver to win consecutive NASCAR premier series championships. His repeat performance in 1956-57 was the highlight of an incredible four-year span; in 1955 and ’58 Baker finished as the series championship runner-up. His career victory total of 46 ranks tied for 14th all-time.
Cotton Owens: Everett “Cotton” Owens enjoyed success as both a driver and owner in NASCAR. Behind the wheel, he won nine times in NASCAR’s premier series competition, including the 1957 Daytona Beach road course. He nearly won the 1959 championship, finishing second to NASCAR Hall of Famer Lee Petty. But as an owner, Owens stood out as one of the greats of NASCAR’s early eras. His eye for talent was unmatched. He hired NASCAR Hall of Famer Junior Johnson in 1962, the same season in which he began a future championship relationship with another NASCAR Hall of Famer David Pearson. Owens won 38 races as an owner.
Herb Thomas: Herb Thomas was truly one of NASCAR’s first superstars. He was the first to win two NASCAR premier series championships (1951, ’53). He finished second in the points standings in 1952 and 1954 giving the North Carolina veteran top-two championship finishes in four consecutive seasons. He finished outside the top two in the championship only once (fifth in 1955) between 1951 and 1956. Thomas won both his championships driving self-owned cars.
Rusty Wallace: Russell William Wallace Jr., the 1989 NASCAR premier series champion, won his first of 55 races in 1986, capturing the checkered flag at Bristol Motor Speedway. His 55 victories rank ninth all time. He was especially adept on the circuit’s short tracks winning 25 times at Bristol, Martinsville, North Wilkesboro and Richmond. His influence on the sport continued after his retirement, as an analyst on ESPN.
Leonard Wood: The Wood Brothers team is renowned as the innovator of the modern pit stop. Leonard Wood, brother of Glen and Delano Wood, was front and center in its development as chief mechanic (crew chief) for the Stuart, Va.-based team. As crew chief, Wood amassed 96 wins and 117 poles in 990 races.
Posted by Dave Moody at 1:09 PM