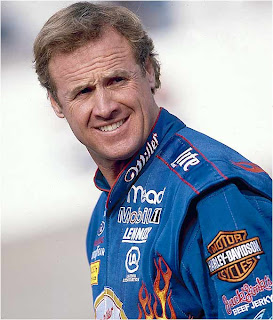 
Russell William Wallace Jr., the 1989 NASCAR Sprint Cup Series champion, followed his father Russ Wallace onto the race track – a path taken as well by brothers Mike and Kenny. Rusty Wallace competed at weekly tracks in Missouri before moving to Midwest-based touring series in which he was identified as a racing star of the future.


He was the U.S. Auto Club’s 1979 rookie of the year finishing third in points to champion A.J. Foyt. In 1983, he won the American Speed Association title competing against NASCAR Sprint Cup champion-to-be Alan Kulwicki and Mark Martin.


Wallace’s first NASCAR Sprint Cup race resulted in his first top-five finish: second at Atlanta Motor Speedway in 1980 driving for Roger Penske. He came to the series full-time in 1984 and won rookie of the year honors driving Cliff Stewart’s Pontiacs. Moving to drag racer Raymond Beadle’s Blue Max Racing in 1986, Wallace won his first of 55 races, capturing the checkered flag at Bristol Motor Speedway. His 55 victories rank tied for eighth all time. He was especially adept on the circuit’s short tracks winning 25 times at Bristol, Martinsville, North Wilkesboro and Richmond.


Wallace remained with Beadle through the 1990 season, winning the 1989 championship by a 12-point margin over Dale Earnhardt. Wallace won 18 times with Blue Max Racing, including road races at Infineon, Riverside and Watkins Glen.


Although failing to win another championship, Wallace’s most successful seasons were spent behind the wheel of Penske Racing Fords and Pontiacs from 1991 through his retirement in 2005. He won 37 times in Roger Penske’s cars finishing second in the points in 1993, the best of 11 top-10 championship rankings with the organization. Wallace currently is an ESPN NASCAR analyst.


This is the latest in a series of GodfatherMotorsports.com biographies profiling the 25 nominees for the 2012 class of the NASCAR Hall Of Fame. Each of the 25 candidates will be profiled in the coming weeks, in alphabetical order.