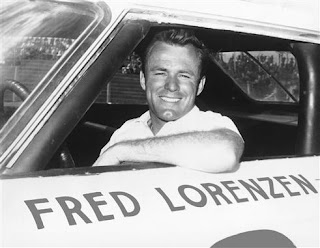 
Despite often competing in only a partial schedule of events, Fred Lorenzen was one of NASCAR’s first true superstars. In 1964, he entered only 16 of the scheduled 62 races but won eight, including five consecutively – and finished 13th in the NASCAR premier series standings.


Lorenzen was extremely popular with fans, and was given several nicknames by the media, inclduing “The Golden Boy,” “Fearless Freddie” and “The Elmhurst Express.”


Lorenzen, now living in Oakwood, Ill., retired in 1967 at the age of 33 but made a brief comeback from 1970-72. He didn’t win a race those last three years but he did post 11 top-five finishes along with capturing two poles.

This is the latest in a series of GodfatherMotorsports.com biographies profiling the 25 nominees for the 2012 class of the NASCAR Hall Of Fame. Each of the 25 candidates will be profiled in the coming weeks, in alphabetical order.