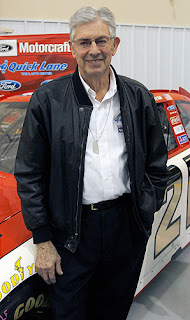 
The Wood Brothers team is renowned as the innovator of the modern pit stop. Leonard Wood, brother of Glen and Delano Wood, was front and center in its development as chief mechanic – that’s what they called crew chiefs in the early days – and part-owner for the Stuart, Va.-based team.


Wood was what you might call a tinkerer. He built a washing machine engine-powered go-kart from parts and pieces he found when he was 13. It still runs and can be seen in the Woods’ museum.


When NASCAR began adding superspeedways – and pit stops – Wood figured out ways to get the race car serviced in the least amount of time.


One major achievement in the team’s pit stop arsenal was the light-weight jack that replaced floor jacks weighing more than 100 pounds found in the repair shops of the day. With Wood’s choreography the team excelled like no other. Wood continued to go over the wall to change tires well into his 50s.


In 1965, Ford and Colin Chapman hired the Woods to service Jim Clark’s car in the Indianapolis 500. Another Wood innovation, an internal device allowing fuel to flow more quickly from a gravity-based fuel tank, dramatically reduced pit times and was key in Clark’s victory.


Wood’s accomplishments were not confined to pit road. He ran the team’s engine shop that provided horsepower and longevity on a par with rivals Holman-Moody and Petty Enterprises. That was instrumental to the success NASCAR Hall of Fame inductee David Pearson enjoyed as Pearson won 43 races between 1972 and 1978. Racing legends Neil Bonnett, Cale Yarborough, A.J. Foyt and Dan Gurney are among drivers winning in Wood Brothers-prepared and crewed cars.


This is the last in a series of GodfatherMotorsports.com biographies profiling the 25 nominees for the 2012 class of the NASCAR Hall Of Fame.
Posted by Dave Moody at 12:32 PM